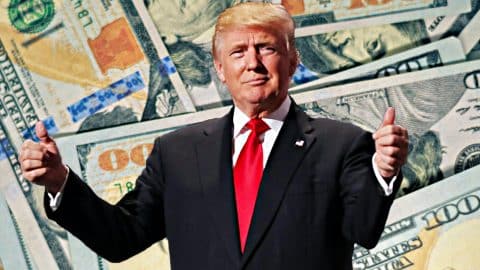 President Trump confirmed a second stimulus package is in the works while speaking with reporters earlier this week.

During the press conference, he told the reporters that his administration will be “asking for additional stimulus money” for Americans. He gave very few details to the package, however, he assured that it will be worth the wait saying, “It will be very good. It’ll be very generous.”

When the reporters asked how much the stimulus payment might be, Trump wouldn’t give a specific amount replying, “You’ll find out about it. You’ll find out.” He added that he expected the relief funds would receive a bipartisan report soon and could be announced within the next couple of weeks.

VIDEO: President Trump commits to 2nd stimulus. He says details would be announced in the coming weeks. The President would not tell me how much of a check Americans will receive. pic.twitter.com/Abd5E8P3Au

The HEROES Act, also known as the Health and Economic Recovery Omnibus Emergency Solutions Act, successfully made its way through the House of Representatives.

On May 15, 2020, the House of Representatives voted to pass the second stimulus bill designed to soften the pandemic’s staggering effects on the health care system and economy. Once fully approved the $3 trillion bill would disperse a second round of stimulus checks in varying amounts from $1,200 to individuals and up to $6,000 for a household, as well as financial relief for state and local governments and businesses.

The Omni Calculator Project has created a tool where Americans can get an idea of what their second stimulus package would look like with the HEROES act. Relatively easy to use, the calculator can determine the estimated amount of money you would receive if the HEROES act is passed. By inputting a few numbers and answering a couple of questions, the calculator can produce a number for you. You can test the calculator out for yourself by clicking here.

In addition to the second round of stimulus checks, the new bill would call for hazard pay for all frontline workers as well as extending the boost to unemployment insurance through January 2021. $175 billion in rent, mortgage, utility assistance, relief for state and local government will also be included in the HEROES act.

Although things look promising, American’s have to wait until the HEROES Act is passed in the senate to know for sure. The Senate is expected to make a decision by July.

Watch the video below for an update on the stimulus package.