By Manly Bryant on April 9, 2020
Advertisement 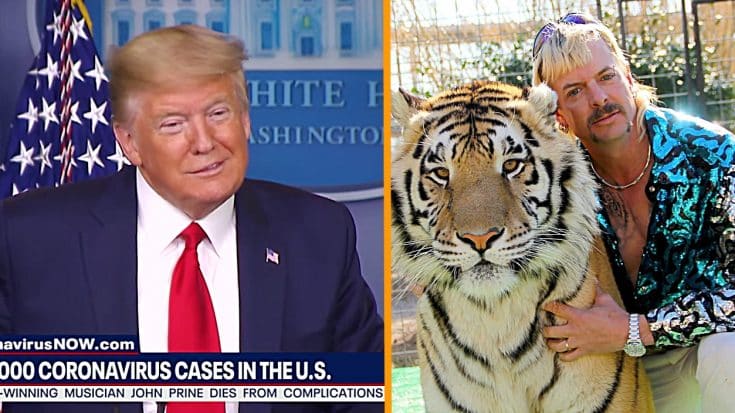 During a press conference on Wednesday (April, 8th, 2020), President Donald Trump was asked about pardoning a man named Joe Exotic from a highly popular Netflix show called Tiger King that many Americans have been watching during the coronavirus lockdown.

‪Ok this is hilarious. Read all the way through. Also credit to the reporter who actually acknowledged I was joking. Normally they know I’m joking but neglect to acknowledge that and run with it as though I’m serious‬. Do you think my dad knows my personality a little bit? This is pretty epic and it was a nice light moment in an otherwise always difficult and serious press conference. ‪@realDonaldTrump . “Which some? Sounds like Don… had to be Don” Yup, you nailed it dad… you know who it wasn’t???? Carole F-ing Baskin ????#TigerKing ‬ ‪???‬

The reporter told the president that Joe Exotic was a former zoo owner who is currently serving 22 years in prison for allegedly plotting to murder a rival zoo owner named Carole Baskin. Joe claims he was wrongly convicted and is requesting that Trump pardon him.

Anyone want to love tigers with me? This sucks being bored n alone. #tigers #gaysingles #gay #california

The man went on to tell the president that his son Donald Trump Jr. was on a media podcast the day before jokingly saying he was going to advocate for the release of Joe Exotic. The reporter asked Trump if he had seen the show himself and if he had any thoughts on pardoning Joe.

The president responded that he knew nothing about it but he would take a look into Joe Exotic’s request. Trump’s answer made major headlines due to the extreme popularity of the Tiger King show. The show is watched by so many people that according to the Huff Post, for the third week in a row, it is the most popular show on Netflix (April 9th, 2020).

To give you some more background on Joe’s case, he was also convicted of eight violations of the Lacey Act and nine violations of the Endangered Species Act. Many people believe Joe is not completely innocent, however, many also believe his convictions were too harsh and would like to see him pardoned, including the podcasters who were on the phone with Donald Trump Jr. the day before the press conference. You can watch the podcast below to hear more of what was said.