Turtle Smashes Through Windshield Of Woman Driving Down Highway 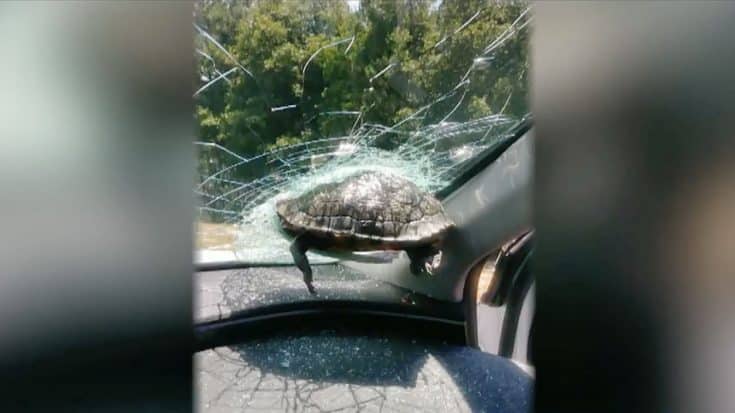 One Georgia woman and her brother are extremely lucky that neither of them suffered any serious injuries after a turtle flew directly into their windshield while driving down the highway. Latonya Lark was driving along Harry S. Truman Parkway in Savannah with her brother, Kevin Grant, on May 19, 2020. Lark told CNN,

“I saw out of the corner of my eye what I thought was a brick. I told my brother, ‘Oh my God there’s a brick flying across the highway.’ No sooner than I said that, it impacted my vehicle. It scared me so bad, it sounded like a bomb went off and glass went all over my brother.”

The turtle impacted the passenger side of the vehicle where Lark’s brother sat. During the interview with CNN he told the story from his perspective,

“I just remember shielding myself while my sister screamed my name. After the turtle hit the glass, she was literally in shock and kept driving. I was the one covered in blood and telling her to calm down and call 911.”

When it comes to hitting objects on the road while driving, obviously the faster you go the more dangerous it becomes. Fortunately, Lark suffered no injuries and her brother walked away with a couple scrapes. The turtle was taken to a nearby wildlife center where it later died.

Watch the video below for the whole story.