By Miranda Raye on March 11, 2021
Advertisement 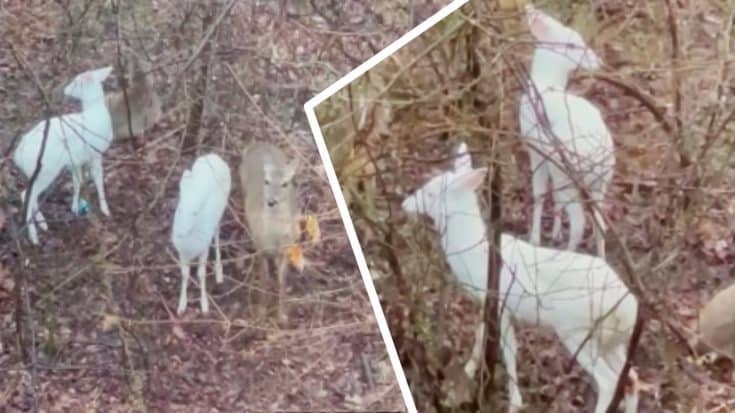 Not many people can say they’ve seen an albino deer. According to the North Carolina Wildlife Resources Commission, albinism “may only be observed in one in 30,000 deer.” Those aren’t high odds!

So what does it take for a deer to be considered albino? And why are they so rare?

“By definition, an albino deer is totally absent of body pigment and is solid white with pink eyes, nose, and hooves.”

As for why albino deer are so rare, Mossy Oak explains it all has to do with genetics:

“Albinism is a recessive genetic trait that is found in animals where the gene responsible for hair, tissue, or skin coloration is missing. Since albinism and piebaldism are recessive traits, both parents must carry the trait to have albino or piebald offspring. The genes responsible for piebald and albino deer are not dominant and oftentimes the deer carrying these genes are biologically inferior.”

Because of this, albino deer sightings are not common. It’s even more rare to see two albino deer in the same spot at the same time.

But that’s exactly what happened to one lucky man, who happened to spot two albino deer in his own backyard!

The man, named Kevin Miles, captured footage of two albino deer together in his yard. They were close enough you could see they were true albinos, with pink noses, eyes, and hooves.

It was raining at the time Miles filmed his video, so the deer were taking cover under some of the trees in his yard. They were accompanied by a small group of non-albino deer.

Several news stations across the U.S. picked up Miles’ video and shared it on their respective Facebook pages. You can catch the clip below.