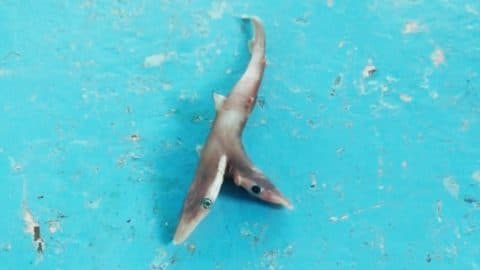 Nitin was fishing along the Maharashtra coastline when he first spotted the creature and thought it was interesting so he took a few pictures of it. He explained that small fish like that are not eaten so he threw it back into the water not realizing how valuable it would have been to a scientist.

“These materials should be preserved out of scientific interest,” Dr Akhilesh said, according to Hindustan Times.

“We do not eat such small fish, especially sharks, so I thought it was strange but decided to throw it anyway,” Nitin explaied.

The Indian Council for Agricultural Research’s Central Marine Fisheries Research Institute (ICAR-CMFRI) in Mumbai took a look at the pictures and confirmed that it was an extremely rare find. They believe it may be the first double-headed shark sighting ever along the Maharashtra coastline.

According to CMFRI records, only four sharks have ever been reported to have two heads. The first report was in 1964 of a two-headed milk shark. The second was a two-headed spadenose shark discovered in 1991 and the third was a double-headed cownose ray in 1984. The most recent one though was in 2008 when a fisherman discovered a two-headed blue shark.

More On The Two-Headed Shark Below