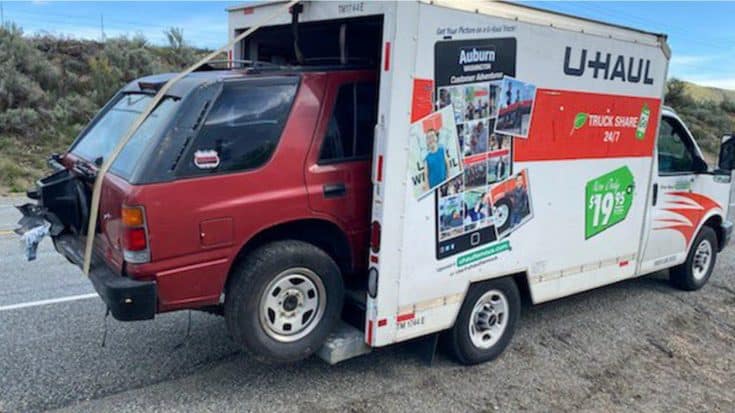 Okanogan State Trooper Cunningham was on duty patrolling the roads when he got a call from the station saying there were getting several calls about a small U-Haul box truck driving down the road with an SUV unsafely hanging out the back of it.

Washington State Patrol said the U-Haul was traveling down State Route 97, just north of Okanogan and four hours east of Seattle when police pulled it over and asked the driver for their license and registration.

Trooper Cunningham learned that the driver had a suspended license and the U-Haul truck was long overdue in borrowing, as well as payments.

The driver was immediately charged with having an unsafe load, fined $139, and the U-Haul box truck, as well as the vehicle inside, were both impounded.

“Safety is paramount on our roadways.” Jeff Lockridge, Manager of Media & Public Relations for U-Haul, said, according to television station KXLY. “It’s easy to point a finger and chuckle at the absurdity of these photos, but there are extreme dangers associated with this kind of action, which is a clear violation of the customer contract and traffic laws.”

Jeff went on to add that if you plan on moving a vehicle, U-Haul has plenty of affordable towing trailers, trucks, and equipment that follows the safety laws that can be rented. Check out one of them in the video below!