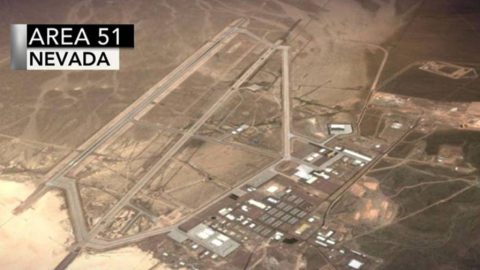 Storm Area 51, They Can't Stop All of Us / Facebook

For years and years, people have come up with theories that the government is housing aliens at the Amargosa Valley, Nevada site, and the people now want answers.

The idea that “they can’t stop us all” to “get them aliens” has lots of people intrigued, each giving their own ideas on how this plan could actually work. Some have joined the event just to leave snarky comments, including funny plans, like the one below.

The poster also ended his long “plan” with the following:

“To anyone actually thinking of storming area 51, there isnt any UFO’s or anything of extraterrestrial origin there its a research base, this has been confirmed by Bob Lazar (if you dont know who he is, google him).”

This Facebook event has gotten so much traction that the United States Air Force has responded.

Without actually mentioning the Facebook event, Air Force spokesperson Laura McAndrews told the Washington Post that they are prepared to stop any threat to the Area 51 facility.

“The U.S. Air Force always stands ready to protect its assets,” McAndrews told the publication, adding that the site is “an open training range for the U.S. Air Force, and we would discourage anyone from trying to come into the area where we train American armed forces.”

Basically, she is saying to enter at your own risk, but you really shouldn’t enter at all! Hopefully people will actually listen to McAndrews, but in the meantime, the Internet’s reaction to this raid is pretty hilarious!

Check out some of the memes below.

Why the US ain’t worried about the Area 51 raid pic.twitter.com/A5OYEQvtLn

Me and my new pals when I bust them outta Area 51 👽👽👽#Area51 pic.twitter.com/cFJrq7ILHr