By Miranda Raye on June 7, 2021
Advertisement 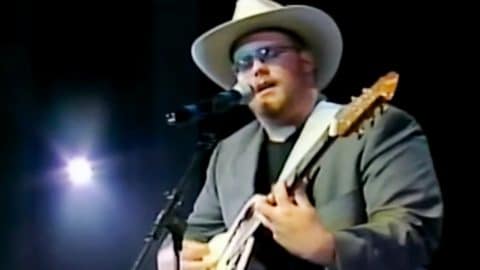 Chris Stapleton experienced his breakout moment when he performed “Tennessee Whiskey” and “Drink You Away” with Justin Timberlake during the 2015 CMA Awards. That performance made Stapleton one of the most popular figures in country music. His album, Traveller, became one of the best-selling country albums in recent history, and he has since earned five Grammy Awards.

Although everyone knew Stapleton’s name after the 2015, he has been a respected member of the country music community for years.

Prior to his breakout moment, Stapleton was most well-known as a songwriter. He penned hit songs such as “Never Wanted Nothing More” by Kenny Chesney and “Love’s Gonna Make It Alright” by George Strait.

Stapleton has been performing for a long time too. His backing vocals are featured on a number of other artists’ songs, including Luke Bryan‘s “Drink a Beer” and Miranda Lambert‘s “Hard Staying Sober.”

He also performed in two bands, The SteelDrivers and The Jompson Brothers. But even before that, Stapleton shared his singing talent during a show at the Kentucky Opry around 20 years ago.

On June 5, 2021, Facebook user named Brad Mckinney uploaded a video of Stapleton’s Kentucky Opry performance. The unearthed footage shows a much younger Stapleton with a short beard, traditional-looking cowboy hat, and a pair of glasses.

Instead of singing one of his own songs, Stapleton covered one of the biggest hits in country music at the time…Lonestar‘s romantic single from 1999, “Amazed.”

Mckinney said in the comments he believes the performance was sometime in 1998. But since “Amazed” came out in 1999, we assume the performance took place in 1999 or afterward.

Even though he looked quite different from the man we know today, there’s no mistaking Stapleton’s voice. He sounded like a star way back then!

Tune in below to watch the throwback video of Stapleton singing “Amazed.” He’s been on a wild journey since this moment, a journey that has led him to country music superstardom.