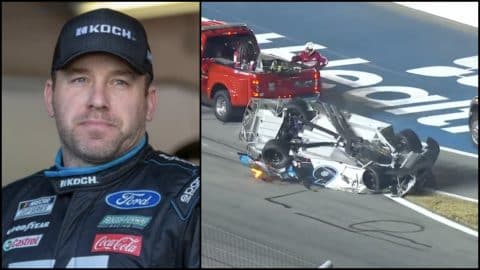 Beloved NASCAR driver Ryan Newman was involved in a horrific wreck just before crossing the finish line at the Daytona 500 Monday (February 17), but is expected to be okay.

NASCAR provided an update on the driver’s condition and read a statement from his family saying:

“Ryan Newman is being treated at Halifax Medical Center. He’s in serious condition, but doctors have indicated that his injuries are non-life-threatening.”

The family asked for privacy during this time, but expressed their appreciation for fans’ “patience and cooperation.”

The 42-year-old driver was in the lead of the 500-mile race before his car was clipped by Ryan Blaney, sending it into the outside wall. Newman’s car went airborne and landed upside-down before the driver’s side door was hit at full speed by Corey LaJoie’s car. Newman’s car was in flames at it slid several hundred feet on it’s roof.

Emergency personnel rushed to Newman’s car and turned it back onto its wheels. It took them approximately 10 minutes to get Newman out of the car.  He was transported by ambulance to a local hospital.

We continue to pray for Ryan Newman and his family, and wish him a full and speedy recovery.