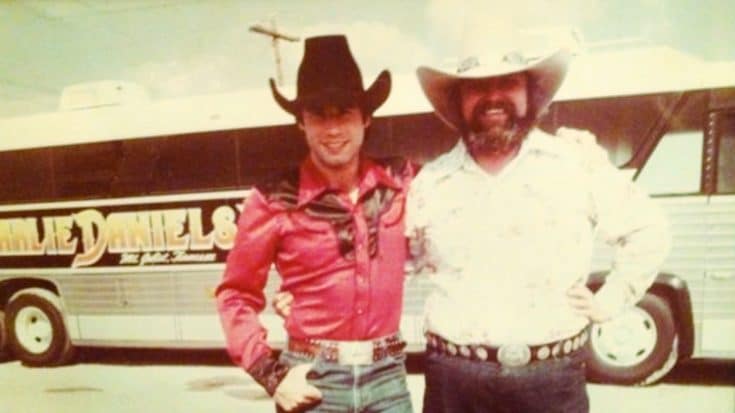 After Charlie Daniels passed away on July 6, tributes came pouring in from country artists of all ages. Even President Trump paid tribute to Charlie on social media, tweeting, “My condolences to his wife Hazel, and their family. Charlie is in my thoughts and prayers. I love his music!”

John is known for his work in iconic films such as Grease, Pulp Fiction, and Saturday Night Fever. But his connection to Charlie resulted from 1980’s Urban Cowboy.

John played Buford Uan “Bud” Davis in the film, who becomes a frequent patron of Gilley’s honky tonk. During one of the scenes at Gilley’s, Charlie and his band appears on stage and sings their hit song, “The Devil Went Down to Georgia.”

How to age 37 years by just looking at. Picture pic.twitter.com/ZYgudhgkkx

Now, 40 years after Urban Cowboy‘s release, John was saddened to hear that Charlie had passed away. He wrote a short note to Hazel and Charlie Jr. to express his condolences after learning of Charlie’s passing.

We were very sorry to hear of Charlie’s passing. Our thoughts are with you at this time.”

John signed his name at the bottom of the note. Charlie’s team thanked him for thinking of Hazel and Charlie Jr., and wrote, “Thank you, ‘Bud,’ much appreciated.”

You can read John’s note to Daniels’ family below.

Thank you, “Bud,” much appreciated. – TeamCDB/BW

Posted by The Charlie Daniels Band on Wednesday, July 8, 2020

John’s note makes it clear that Charlie will be missed by all, not just those close to the country music industry.

Relieve the moment Charlie and John worked together by watching Charlie’s performance in Urban Cowboy below.