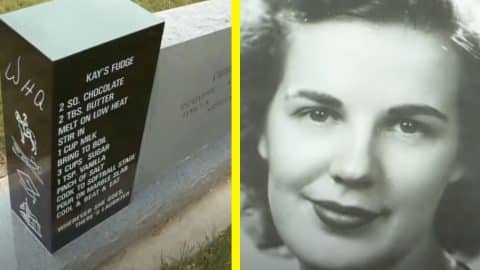 Kathryn “Kay” Andrews passed away at the age of 97 in December 2019 and joined her husband Wade in heaven who had passed in 2000.

At the time of his passing, Kay had chosen several special symbols to be etched into the side of their shared headstone that represented important parts of his life. When planning what she wanted for her own part of the headstone, Kay chose her much-loved secret fudge recipe…and it quickly became a treasured recipe on internet forums!

“I knew that the headstone had been circulating on Pinterest for like a long time now,” Kay’s granddaughter Emily told ABC4, according to Yahoo!. “Since my grandpa passed away, when I was eight years old, I knew it was kind of internet famous. But yeah, I didn’t expect it to be on the news this week.”

Kay’s daughter Janice Johnson said that her mom was someone who really loved people and “she would write poetry and take fudge whenever people got together.”

Johnson also told KSTU that her mom kept candies in her purse for children who might be having a tough time as she always loved bringing joy to others.

See the full video news segment from FOX 13 Utah below.