“Vampire Fish” Spawning In Connecticut, Public Warned To Not Disturb 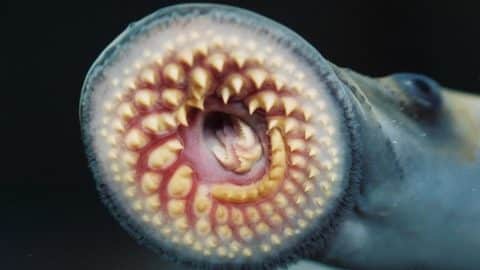 Among the most primitive of all vertebrate species, the sea lamprey is a parasitic fish native to the northern and western Atlantic Ocean. It may be America’s first destructive invasive species, according to the National Oceanic and Atmospheric Administration.

Posted by Great Lakes Fishery Commission on Friday, May 4, 2012

Sea Lampreys invaded the Great Lakes in the early 20th century via the Welland Canal, which connects Lakes Ontario and Erie and forms a key section of the St. Lawrence Seaway.

Within ten years, the lampreys have invaded all five Great Lakes, becoming strong predators of commercial fish such as perch, trout, and whitefish, causing a major collapse to trout populations within the last 100 years. They are known to parasitize other fish by sucking their blood and other body fluids.

Sea lampreys attach to fish with a suction cup mouth, rasp a hole through the fish’s scales and skin, and feed on the fish’s body fluids.

Since then and due to the impact of lamprey’s unchecked proliferation, the Great Lakes Fishery Commission decided to coordinate control of sea lampreys in the lakes, which is conducted by the U.S. Fish and Wildlife Service and Fisheries and Oceans Canada.

Field biologists set up barriers and traps in the streams that feed the lakes to prevent the lamprey’s upstream movements. They also apply chemicals that target lamprey larvae but are harmless to other aquatic creatures as explained by The National Oceanic and Atmospheric Administration.

Though sea lampreys are known for being harmful to commercial fish, the Vermont Fish & Wildlife Department issued a publication on June 22nd, 2020, to remind the public to not disturb spawning sea lamprey. Its goal is to educate the public on the existence of two types of population among sea lamprey (young lampreys and adult lampreys).

While larval lampreys remain sedentary during the first few years of their lives in freshwaters and are not harmful, they become parasitic fish at an age of around 5 years when they emigrate to the ocean. They attach to and feed on fish. In turn, lampreys are a food source in the marine environment for a number of fish, marine mammals, and bird species.

“Adult lamprey transport marine-derived nutrients and minerals into the freshwater ecosystem, which boosts primary productivity in the stream and riparian environment supporting macroinvertebrates and native fish and other wildlife,” Bangor Daily reported a marine resource scientist for the Maine Department of Marine Resources Division of Sea Run Fisheries and Habitat, Jason Valliere, saying.

“If you happen to see a spawning sea lamprey or a lamprey carcass, don’t be alarmed,” explained Lael Will, fisheries biologist with Vermont Fish & Wildlife.

After the publication was released on Vermont Fish & Wildlife Facebook page, the post was shared 787 times and received 291 comments from followers who also shared pictures of sea lampreys they discovered in the lakes.

Watch the video below to learn more about how sea lampreys evolve over time and attack the paddlefish population.