By Jennifer Pernicano on November 18, 2019
Advertisement 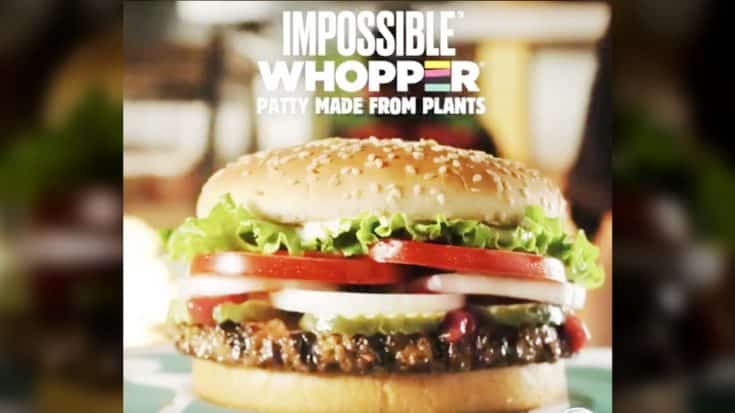 Burger King made headlines when they announced they were teaming up with Impossible Foods to put a plant-based burger on their menu – the Impossible Whopper.

It has been a hit among vegetarians, vegans, and kosher folk! But it seems that some people have issues with how the burgers are made.

One Twitter user wrote, “For anyone looking to eat the impossible whopper from Burger King, if you are Vegan do not eat that burger they cook it on the same grill as the regular dead cow burger!”

For anyone looking to eat the impossible whopper from Burger King, if you are Vegan do not eat that burger they cook it on the same grill as the regular dead cow burger! #BURGERKING #ImpossibleWhopper Is not vegan #Govegan @BurgerKing

Another said they asked for their Impossible burger to be cooked on a separate grill or pan. According to them, the employees said, “We don’t do that here.”

Went to @BurgerKing and asked for an impossible burger. I asked for them to cook it on a separate grill or pan since I’m vegetarian and don’t want meat juice on what I’m eating and they replied “we don’t do that here”. What’s the point of having a vegan burger if it’s not vegan?

One Twitter user believed someone could get “illness by cross contamination” if a meatless burger was cooked on the same grill as a regular one.

An Impossible Burger at @BurgerKing is only vegetarian/vegan if they can guarantee that there's a special grill and special utensils not contaminated by meat juice. Illness by cross contamination is real, folks. #ImpossibleWhopper

Another person who isn’t happy about the way the burgers are prepared is vegan man named Phillip Williams, who claimed there was too much meat juice on his Impossible Whooper and sued the fast food chain on Nov. 18, 2019.

Williams claimed that at some locations, the meatless burgers are cooked on the same grill as the beef burgers and chicken, therefore making the Impossible burgers “contaminated with meat byproducts.” He singled out a location in Atlanta. According to Fox Business, Williams’ suit says that the Atlanta franchise “has no disclosures on its menu alerting consumers of potential meat residue being cooked onto the Impossible Burger.”

He also notes the many complaints about it online.

A spokesperson for Burger King told the Daily Mail that customers can ask to have the Impossible Whopper cooked on a different broiler, but vegan and vegetarian customers claim they were not informed of the option.

There is a note on the Burger King website that says, “For guests looking for a meat-free option, a non-broiler method of preparation is available upon request.