Veteran Sues HOA For $1 Mil After A 9-Year Fight Over U.S. Flag In Front Yard

By Manly Bryant on February 25, 2020
Advertisement 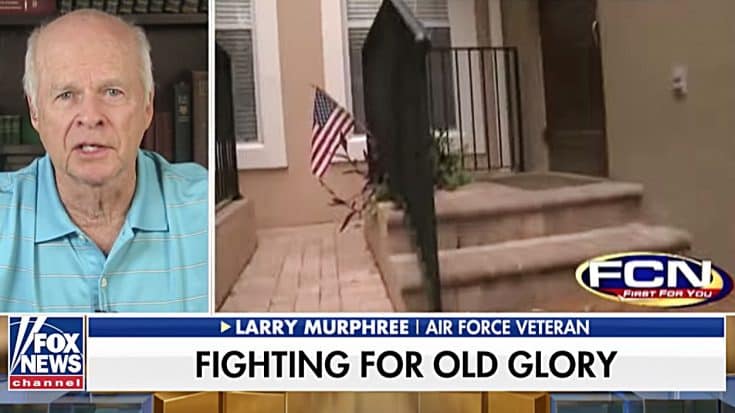 Larry Murphree, an Air Force veteran from Jacksonville, Florida appeared in court the other day after being sued by the Home Owners Association (HOA) for flying a small American flag in his yard.

He was first fined in 2011 for displaying the flag in his flower pot. They said the flag was a violation of their association’s rules and at the time they settled the lawsuit with a settlement agreement. Larry then got on TV and did an interview with Fox and Friends talking about the incident and it got so much attention that the HOA decided to sue him because they didn’t want him to talk to the media about the situation and felt he was breaching the contract they had.

They felt Larry said things on TV that made the association look bad and decided to take him to court over it. However, the judge overturned it. Now Murphree has come back to the courthouse to countersue the HOA and looking for $1 million dollars in damages.

“This is America, this is a man who served this country, put his life on the line. He wants to represent the country with a little flag in his yard and he can’t? And he’s brought to court?” Murphree supporter Roger Dodd said in the video below.

Larry says he’s countersuing the HOA for them breaching the contract, stating that the HOA violated the confidentiality part of the agreement by publishing it and making it public. Larry’s attorney also said that the HOA made up a new “flower pot rule” just to make sure Larry couldn’t fly his flag. Due to the fines, Larry was forced to foreclose on his house and move.