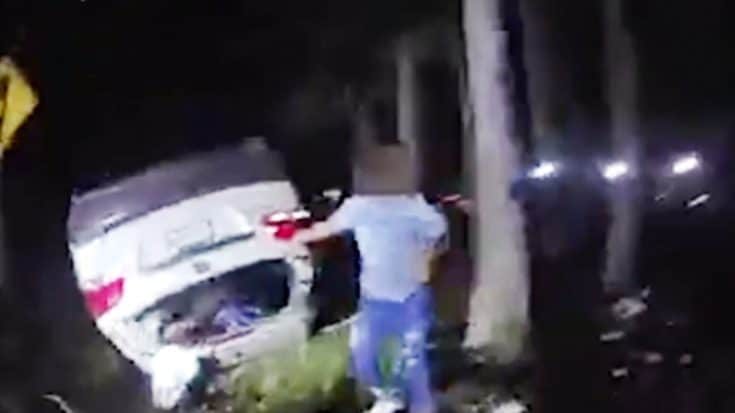 A sheriff’s deputy is being celebrated as a hero after single-handedly lifting a vehicle off a car accident victim.

According to a statement from the Gloucester County Sheriff’s Office, the accident occurred on May 7th. The deputy responded to a report of an overturned vehicle and entrapment in Gloucester County, Virginia. When the officer arrived on the scene, he found the driver clasped underneath the car. A child inside the vehicle began to plead for the officer to save their mother, telling the deputy that “she can’t breathe.”

“The driver was laying underneath the vehicle with her head pinned by the sunroof,” the official department report explained in a statement obtained by ABC News. “Seeing the trauma her child was witnessing, Deputy J. Holt went into overdrive.”

A portion of Holt’s body camera was released to the public. In the footage, viewers can see the officer sprint towards the accident and assess the situation. While at first, Holt did not believe that he could free the woman without additional help, but the deputy’s adrenaline gave him enough strength to lift the car off the woman.

“Through sheer will and determination due to fearing the female may succumb to her circumstance in front of her panic-stricken child, Deputy J. Holt took quick action and was able to physically lift the vehicle up enough for the driver to maneuver her head out to safety,” the department explained in their public statement.

Watch Holt’s heroic act in the video below.

Possessing the strength to lift a car is usually only something seen in the movies. For another rare instance, check out the video below.