By Manly Bryant on September 15, 2020
Advertisement 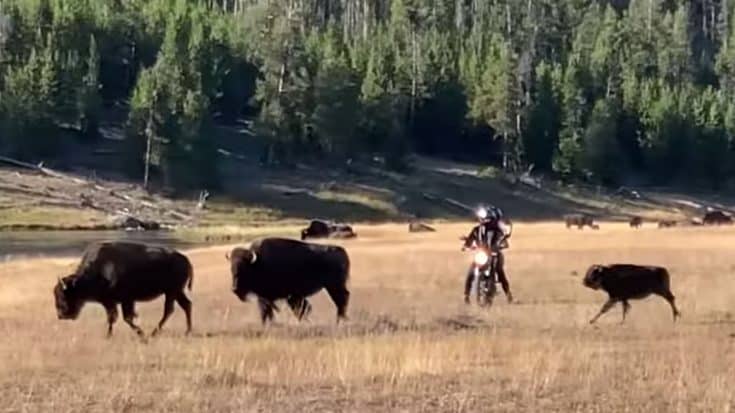 A recent video has surfaced that shows a group of motorcyclists harassing a bison herd in Yellowstone National Park.

The video centers around a seemingly young group of motorcyclists that took their bikes off-road in attempt to ride with a bison herd. Other people can be heard yelling at the culprits to get back on the road and to leave the bison alone. The video was uploaded to YouTube on September 11, 2020.

The motorcyclists violated a number of the park’s rules and regulations regarding interaction with the wildlife.

The Yellowstone National Park encourages awareness and safety while visiting the park since the animals that live in the park are wild and unpredictable. When an animal is near a trail, boardwalk, parking lot, or in a developed area, visitors are required to give it space. Bison can be particularly aggressive, especially around mating season.

Bison mating season is still going on in the park. Male bison are particularly aggressive right now, though all bison and other wildlife can be dangerous. Remember to always keep your distance—25 yards from bison and elk; 100 yards from all other wildlife. #Yellowstone #NationalPark #WhatWildlifeDoWednesday #Bison

The American bison is recognized as a symbol of American history. As settlers expanded into the West in the 1800s, bison were nearly made extinct. During that time, there were an estimated 30 million bison roaming the plains of United States but those numbers quickly went down. By the time Congress made it illegal to kill bison in 1894, there were fewer than 1,000 left. Under President Teddy Roosevelt, a conservation effort was made and the American people started to appreciate the animal and everything it represents. Under the Obama administration, the bison was declared the national mammal. Conservation efforts saved this national treasure and today, there are bison in all 50 states with close to 5,000 located specifically in Yellowstone National Park.

130 years ago today, Wyoming became the 44th state in the Union! Approximately 96% of Yellowstone resides in the state. What are some of your favorite sites to explore in Wyoming? Photo: Bull bison grazing along an ephemeral pool in Lamar Valley #WyomingDay

As of now there is no information on whether or not the group was identified and charged.

Watch the video of the motorcyclists below.