Video: Reporter Grabs Camera & Drives Off As Herd Of Bison Approach Him

By Manly Bryant on March 27, 2020
Advertisement 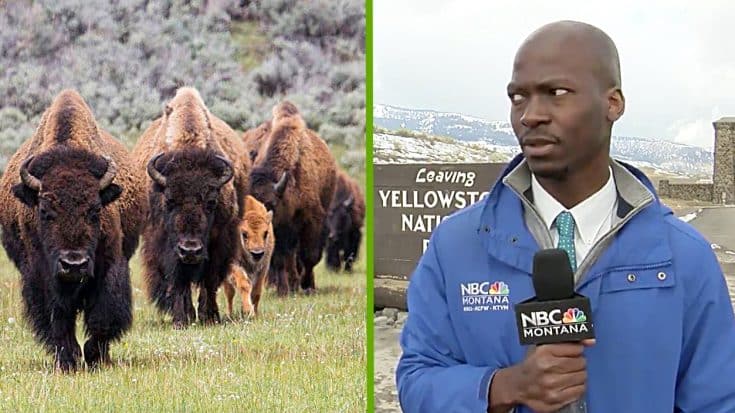 Montana KTVM-TV news reporter, Deion Broxton, had just set his camera on a tripod to record himself giving an update of what’s going on in Yellowstone National Park when a herd of bison came moving towards him.

There was a herd of bison walking right toward me at @YellowstoneNPS today! pic.twitter.com/sdrBvojpwF

The video showed him attempting to start his report by saying “Montana,” and then quickly pausing to divert his eyes towards the herd of bison moving in his direction. He takes a big gulp looking a little worried and says, “Oh my God. Oh my God.” He looks back at the camera and then back at the bison several times before getting scared and walking off camera.

As he walks away he says, “Oh no, I ain’t messing with you.” Broxton quickly grabs the camera on the tripod and puts it in the back of his car and doesn’t even waste time trying to press the button to stop recording. After that, he got in the car and drove away to get himself in a safer position to film the bison.

Here’s the video of the bison I shot once I got a safe distance away lol pic.twitter.com/uL3XiR2ISR

On Wednesday, March 25th, 2020, he shared the video on Twitter and by Friday it had been viewed more than 10 million times. The clip has many people laughing, retweeting and commenting their thoughts about the situation. Even the official Twitter page for Yellowstone National Park shared the video telling people that this is how you should act when you’re approached by wildlife.

“A perfect example of what to do when approached by wildlife! Thanks Deion for putting the Yellowstone Pledge into action!” they wrote.

A perfect example of what to do when approached by wildlife! ? Thanks Deion for putting the #YellowstonePledge into action! https://t.co/A3h75AACeV https://t.co/YyZj7eK6gd