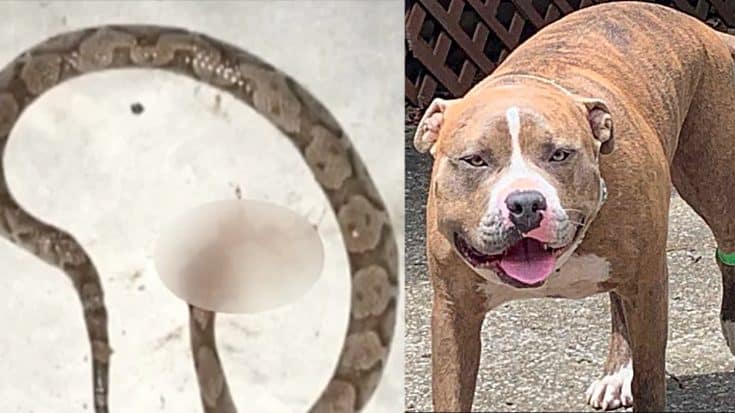 Dog Protecting His Loved One

If you got a friend that’s willing to put their life ON THE LINE for you then you got real protection. This story is about a dog that saw its owner in trouble and jumped in between her and the danger.

Pitbull owner Hayley McCormack was walking into her home one night after she got off work when a copperhead snake was coiled up in a pile of leaves near the steps to her home. Hayley lives in the wooded area of Davidson County, Tennessee and was on her phone not really paying attention to the danger she was walking into.

“It was in this leaf-like area over here, and it was recoiled back so it was going to strike, he got there before I could go any further, he grabbed it by the tail, and then just started kind of shaking it,” Hayley said, “While he was shaking it, it was biting his face, it got him three times for sure, possibly four.”

Arlo Killed The Snake But Was Bitten

Her pitbull, Arlo, saw the snake and wasn’t about to let it bite Hayley so he jumped in between the two and started attacking the snake. Arlo killed the copperhead but not before he got bit multiple times in the face. Hayley rushed Arlo to the hospital where they gave him anti-venom.

“His neck is super swollen,” McCormack said, “It made his eye almost completely swollen shut. To think how much loyalty, and love he had for me, to risk his own life for mine, it’s really special. It makes me have more respect for him not just as a dog, but as a family member, somebody that protects me,”

Arlo made a full recovery and they are both lucky to be alive.