By Megan Dinsdale on June 24, 2019
Advertisement 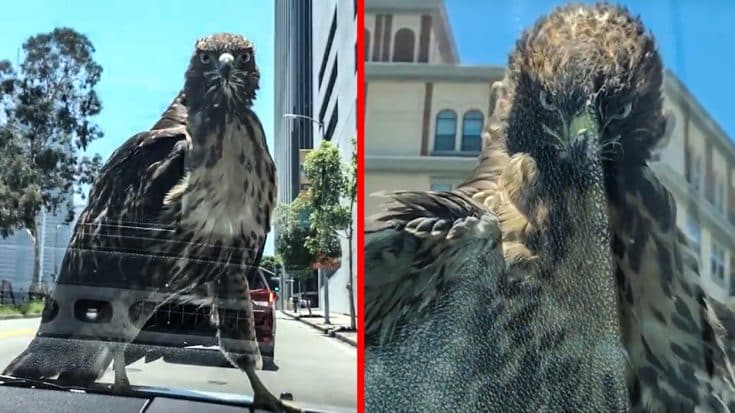 Driving in Los Angeles can be frustrating and boring most of the time, but other times you may see something interesting. Two unsuspecting drivers got their share of interesting when a red-tailed hawk landed on the hood of their car and went on a 15-minute ride near downtown Los Angeles.

Rebecca Hobbs and Staci Eddy were simply on their way to the paint store when out of nowhere a hawk landed on the car hood and startled both of them. The hawk then started staring at them through the windshield as the two were screaming trying to get the bird off of the car.

“Get off of my car!” Rebecca Hobbs

You can see at the beginning of the video both Rebecca and Stacy trying different tactics to get the bird off the car and asking what to do. A bystander on a scooter takes a quick try at shooing the bird away to no avail. The video below gets more interesting as they begin to drive and the hawk shows no sign of leaving.

Are we giving him a ride?! What is happening? Stacy Eddy says as the two start to laugh at the situation.

What would you do in this situation?

After a little while the two start trying to figure out who to call for help. They mention calling animal control but decide to phone a bird expert friend first. They decide to ironically call none other than Ken Nolan, the screenwriter for Black Hawk Down. We aren’t making this up.

Ken starts brainstorming ideas of how to get the hawk off the car with the two girls. The whole time Ken is in disbelief and laughing at the situation.

“Do you wanna park and just sorta get out and shoo him?” Ken suggests to the girls.

“No! It’s a hawk Ken.” Stacy and Rebecca scream back to Ken’s idea.

“He won’t hurt you….” Ken then bursts into laughter.

With no success Rebecca and Stacy continue driving around. As the two make a turn, a gust of wind pushes the bird across the hood. The hawk seems to fumble for a second before expertly recovering its balance. You can hear the hilarious commentary in the video below as they continue to drive around.

“He’s staring at us… like he is staring into our souls.” Stacy Eddy questionably jokes.

At this point bystanders are taking photos and videos of the bizarre situation. Rebecca and Stacy pull over and start interacting with the bird by waving their hands back and forth. After what seemed like an eternity the hawk finally loses interest and flies away perfectly fine. Now that is something you don’t see every day and gives a whole new meaning to rideshare.

You can watch the incredible video below.

If you happen to catch yourself in a similar situation make sure to contact your state wildlife and fish conservation commission.