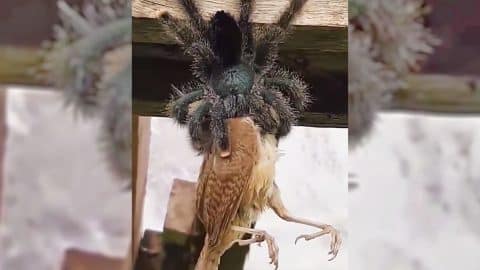 A video recently posted and circulating the internet, shows something so frightening it’s hard to believe it’s real at first. The minute-long clip is of a giant, hairy spider devouring an entire bird.

According to Newsweek, the video poster initially misidentified the spider as a Goliath bird eater, which is the largest spider in the world. The spider in this video is actually believed to be a pink toe tarantula.

Avicularia avicularia, know by various names including Pink Toe Tarantula. It's so much fun finding wildlife in a rainforest at night. We found this beauty in Peru. #SpidersOfTheWorldWeekend pic.twitter.com/42Ztx4z54L

Jason Dunlop, from the Museum of Natural History at the Leibniz Institute for Evolution and Biodiversity Research, Germany, studies arachnids and their relatives. He told Newsweek the spider in the video appears to be a pink toe tarantula (Avicularia avicularia), or at least something closely related.

#Avicularia #avicularia, the Guianan pink toe tarantula. I shot this in Guyana in 2015#Arachtober pic.twitter.com/K38NXn6pbE

This particular species of tarantula lives in trees and is found in rainforests in northern South America. Females have a leg span of around 5 inches, while males are slightly smaller, at around 3.5 inches. They are black and hairy, with some pink coloring at the end of their legs. Pink toe tarantulas have four appendages near their mouths, with two containing their fangs and venom. The other two appendages are used as claws and for feeling.

WARNING: MAY BE DIFFICULT FOR SOME VIEWERS TO WATCH

An Avicularia munching on a bird. pic.twitter.com/IdjQyWMxFZ