Video: Travis Tritt’s Wife Has Reunion With Deer She Raised

By Jennifer Pernicano on April 17, 2019
Advertisement 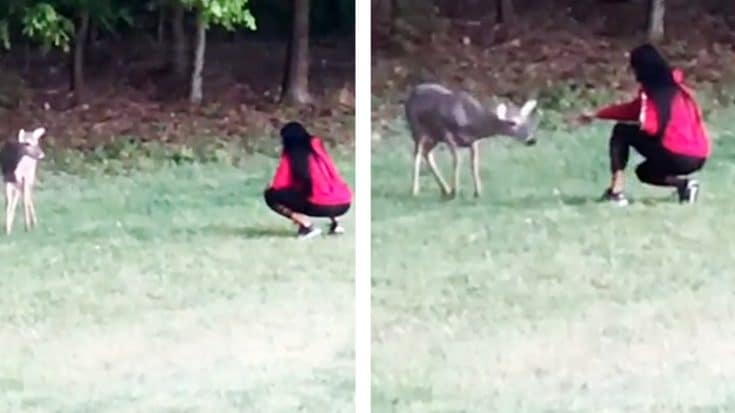 Travis Tritt‘s wife, Theresa got the surprise of a lifetime when she was reunited with an old furry friend. Luckily, Travis got the sweet moment on video.

Travis and his wife, Theresa have been married for 22 years. The couple tied the knot back in 1997 and have been falling for each other every day since. In his anniversary post, Travis wrote,

“After all this time our love and our bond has only grown stronger. At a time when so many marriages don’t last, I’m so blessed and thankful for the strong and special love that we share.”

Twenty two years ago today, I married the sweetest and most beautiful woman I have ever known. After all this time our love and our bond has only grown stronger. At a time when so many marriages don’t last, I’m so blessed and thankful for the strong and special love that we share. I can’t imagine going through life without her by my side. Happy Anniversary!

The couple has since welcomed three children into the world – two sons, Tristan James and Tarian Nathaniel, and one daughter, Tyler Reese. Even through months of tours and travel, the family has remained very tight-knit, trying to be together whenever they can.

A toast on New Year’s Eve from our home to yours. Have a happy, healthy and blessed 2019!

Of course, as the kids get older the house seems to get a little quieter. But just the other day, Theresa got a surprise visit from an unexpected guest.

On March 16, Travis and Theresa were on their farm when she noticed one of the deer. It just happened to be “one of the deer she raised when this little buck was orphaned as a baby.” Travis began filming as she made her way over to the deer.

As Theresa slowly walks over to the deer, it notices her immediately but does not run. The deer actually starts walking toward her! At first, he is very timid, keeping a distance between Theresa’s reaching hand and himself. It is obvious that the deer either trusts or remembers Theresa as it does not run but rather investigates.

Looks like Theresa Tritt is quite the animal whisperer!

Fans agreed too. All the comments on Travis’ video were praise as his fans found it to be the sweetest moment ever – some even calling her Snow White!

We’re so glad Travis caught this priceless moment on camera.

My wife, Theresa on our farm today reuniting with one of the deer she raised when this little buck was orphaned as a baby. Very sweet moment!