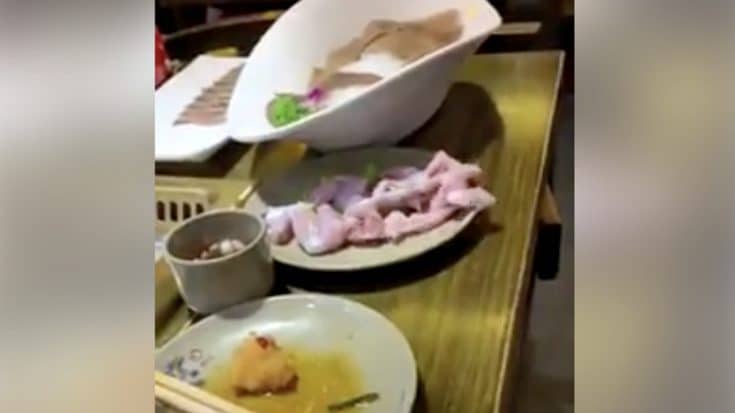 Few videos have caused as much discussion and debate as a recent video of “zombie chicken” that quickly went viral. The disturbing video shows a piece of raw meat appearing to crawl off the table at an asian restaurant as onlookers scream in horror.

The video appears to have originated on a Chinese-language Facebook page where it was posted on June 16. The “zombie chicken” footage quickly circulated on social media, sparking a great deal of debate about its authenticity. One of the most plausible explanations is that the meat isn’t chicken at all, but perhaps frog legs.

“What they’re showing is too extreme,” an expert said to USA TODAY. “For a chicken to twitch, you have to immediately kill it and debone it and place it on the plate. For something like twitching to happen or for a muscle to do something like that, it has to be done right then and there.”

He said that a more likely explanation is that the meat is a frog leg. Salt can cause frog muscles to contract and move around, making it look like it’s still alive.

Other experts claim that the footage is nothing more than a cleverly doctored video. Senior video editor Robert Lindeman claims the video is fake because the movements of the mystery meat are too “mechanical.”

“The start and end of the video are a little too convenient,” he said. “The pan to the left so you don’t see any more movement raises flags. I would get up close with my camera if that thing was moving.”

We may never know the truth behind the video that is turning meat lovers in to vegetarians, but one thing is certain…We can’t stop watching.

Watch the zombie chicken video that has everyone talking below, then let us know if you think it’s real or a clever fake.