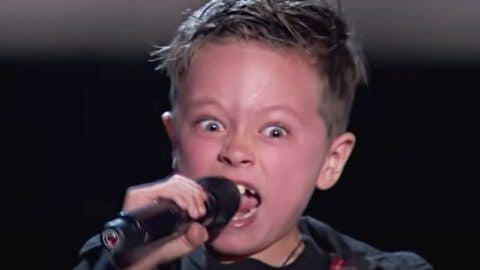 A seven-year-old boy may have just revealed himself to be the next great rockstar.

On  La Voz Kids (“The Voice Kids”) in Spain, contestant Jesús del Río gave his rendition of AC/DC’s iconic “Highway to Hell.” While most seven-year-olds would struggle through the challenging note changes, Jesús handled the song like a pro.

From the very first notes, the judges knew that they were listening to a young star. Instantly wowed, three coaches turned their chairs around for Jesús. A fourth judge was blocked from selecting the talented youngster from his team. Still, the coach stood up and attempted to push his chair around manually.

After Jesús hit one final, rockstar note, all the judges instantly rushed onstage like a crowd of fans. The coaches showered Jesús in hugs, kisses, and praise. Even without translation, it is clear to see how much the coaches enjoyed the contestant’s performance.

In the end, Jesús was left to choose one coach’s team; the seven-year-old ultimately sided with Spanish singer Melendi. Immediately, the winning judge ran on stage and joyfully lifted the youngster in the air.

Watch the full performance in the video below.