‘Voice’ Coach’s Team Wiped Out Prior To Finale 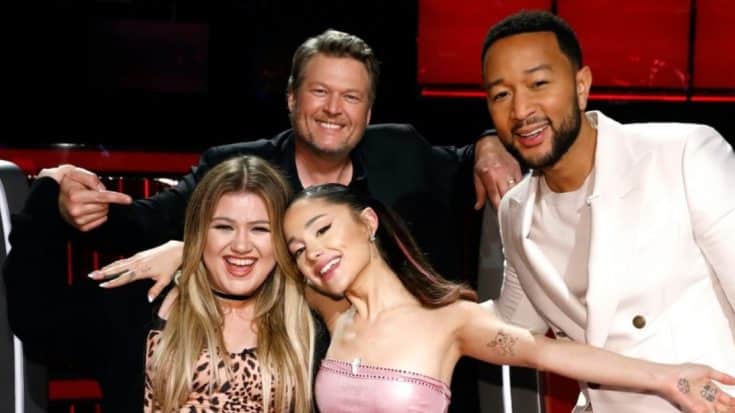 A surprising results show on Tuesday night’s episode of The Voice sent three teams home, leaving one coach without any competitors going into next week’s finale.

Night two of Season 21’s semi-finals started with eight contestants fighting for a spot in the finale and ended with only five moving on. Both of coach Kelly Clarkson’s acts, sibling trio Girl Named Tom and this season’s youngest competitor Hailey Mia, advanced, making Clarkson the only coach this week to survive eliminations.

Team Blake also had two acts move on, including Paris Winningham and Wendy Moten, who is donning casts on both arms after a nasty tumble over a stage monitor last month.

With only one spot left in the finale, it became evident that either John Legend or Ariana Grande weren’t going to be represented in the Top 5. The final spot was going to be decided by a public vote called the Instant Save. The artists vying for the coveted spot were father/son duo Jim and Sasha Allen (Team Ariana Grande), Jershika Maple (Team Legend), Joshua Vacanti (Team Legend), and Lana Scott (Team Blake).

Each act had the opportunity to perform one more time before votes were cast for the Instant Save. Jim and Sasha covered the Hall & Oates hit “Rich Girl.” Jershika Maple went back to her gospel roots with a soulful rendition of Tasha Cobbs Leonard’s “Break Every Chain.”

Lana Scott, the competition’s last remaining country singer, pulled out all the stops with a rendition of Lainey Wilson’s “Things a Man Oughta Know.” Joshua Vacanti arguably took the biggest risk with his Instant Save performance by covering Celine Dion’s “My Heart Will Go On.”

Ultimately, Maple won the save for the second week in a row, meaning that Ariana Grande was left without an act representing her team in the finale.

“Tuesday’s are the worst days ever,” Grande, a first-time Voice coach, said through tears after hearing the Instant Save results.