By Manly Bryant on December 17, 2018
Advertisement 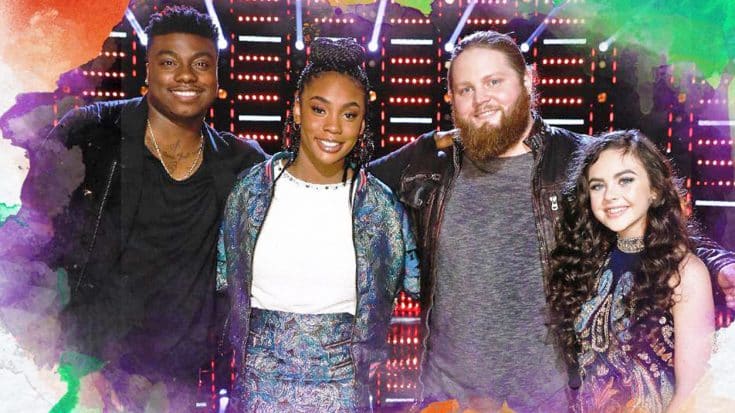 As season 15 of The Voice wraps up, the competition between the coaches and their picks heats up. On this season of the popular singing competition, coaches Kelly Clarkson, Jennifer Hudson, Adam Levine, and Blake Shelton have been lucky with the amount of talented singers on each team. For this season’s finale, each of the four finalists will pair up with special musical talents, singing a hit song of theirs. This year, country has been getting big recognition.

@officialchevelshepherd + @kirk_jay together = 200% COUNTRY! ? Wouldn’t you buy a ticket to this jamboree? #TheVoice

Preparing for the big finale are young talents, Kennedy Holmes, Chris Kroeze, Kirk Jay, and Chevel Shepherd. Shelton has two of the finalists on his team, Jay and Kroeze. Shepherd is on Clarkson’s team and Holmes is on Hudson’s team. Levine, unfortunately, doesn’t have a finalist for this season’s finale.

The collaborations are targeted toward the genre that the individual singers thrive in. Country singin’ Shepherd will pair up with Dan + Shay to perform their current No. 1 hit “Speechless.” Another country powerhouse, Jay, will be teaming up with Rascal Flatts for their “Back to Life.” This performance will be an incredibly special one as Jay put on an unforgettable audition with the band’s “Bless the Broken Road.”

Kroeze is set to take on “Long Train Runnin” alongside the Doobie Brothers for a rockin’ performance. Lastly, the soulful Holmes will be accompanied by Kelly Rowland to sing “When Love Takes Over.”

Overall, the night is bound to take music to new heights. With some of music’s most popular acts taking the stage alongside these young talents, the competition is definitely going heat up. With the final winner being based completely on the fans’ votes, it’s sure to be a close call.

Make sure to tune in tonight to see these special guests perform with The Voice‘s future season 15 winner.