By Miranda Raye on September 20, 2022
Advertisement 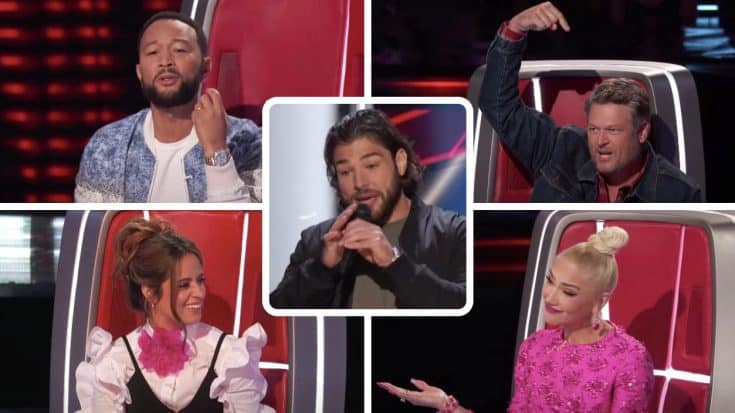 A new season of The Voice started on Monday night (September 19). Blake Shelton and John Legend returned to coach, and Gwen Stefani came back after being away from the show for a few seasons.

There’s one newcomer in the mix…pop star Camila Cabello. She’s already making her mark and has claimed some talented artists for her team.

But no one ever expected that Cabello of all people would end up coaching a country singer!

Orlando Mendez took to the Voice stage with a performance of Luke Combs‘ rowdy #1 hit, “Beer Never Broke My Heart.” Cabello was actually the first coach who turned around for him.

Stefani turned her chair soon after Cabello. Shelton was eventually convinced by Cabello to turn his chair as well. Legend turned his chair at the last second…giving Mendez a four-chair turn!

Shelton tried to make his case by listing all of his accomplishments as a country singer, including the fact he’s a member of the Grand Ole Opry. He wanted Mendez to believe he’d be the perfect coach for him if he loves country music.

Mendez told Shelton country music is his passion. He grew up listening to Shelton’s songs, so he admires him.

Though Cabello had a leg up on Shelton. Mendez is from Miami, Florida, and Cabello grew up in Miami after moving there from Havana, Cuba at the age of six. Mendez went on to reveal that his brothers actually went to the same school as Cabello and he has Cuban roots too.

Cabello praised Mendez for having a unique voice and for making her “feel” with his performance. She said she would love to help guide him on his Voice journey.

Stefani and Legend also argued their own cases, but it seemed pretty obvious Mendez was going to pick either Shelton or Cabello. When the time finally came for Mendez to pick his coach, he chose Cabello!

“Let’s get it bro!” Cabello exclaimed as she rushed onstage to hug her new team member.

Head below to watch Mendez sing and see how Cabello convinced him to join her team. We have a feeling Shelton will be looking to steal Mendez for his own team if he ever gets the opportunity down the line!