Father And Son Get Surprised By 14 Raccoons – And A Coyote 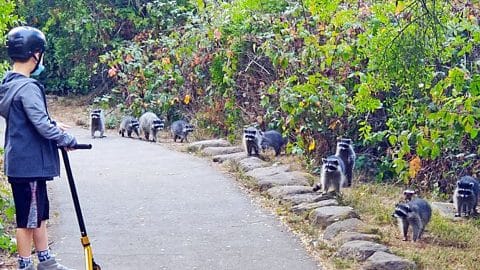 It’s fun to see chipmunks, a squirrel, or even a deer when you’re out for a stroll – but an extended family of raccoons, plus a coyote?

That’s something you don’t see every day!

Marc Estoque said he, his son, and their dog were out on a trail at Golden Gate Park, and they came across 14 raccoons standing on the edge of the paved walkway.

In a video the pair recorded, Estoque’s son says, “Never seen that before.”

Then, his tone changes as he whispers, “Dad. A coyote.”

The video then pans to a coyote standing just a few feet from the edge of the path.

While seeing a coyote in such a situation can feel terrifying, it’s likely that the coyote was in the area working to make dinner out of raccoons. The National Park Service says that coyotes help to regulate the populations of raccoons, skunks, and small rodents.

If you encounter a coyote or other intimidating wildlife while you’re enjoying the great outdoors, it’s recommended that you maintain a safe distance, and do not attempt to feed the animal(s). Don’t try to interact with the animal by making noise, and don’t think that you are safe because you’re in a large group. Enjoy the experience of watching the animal from far away.