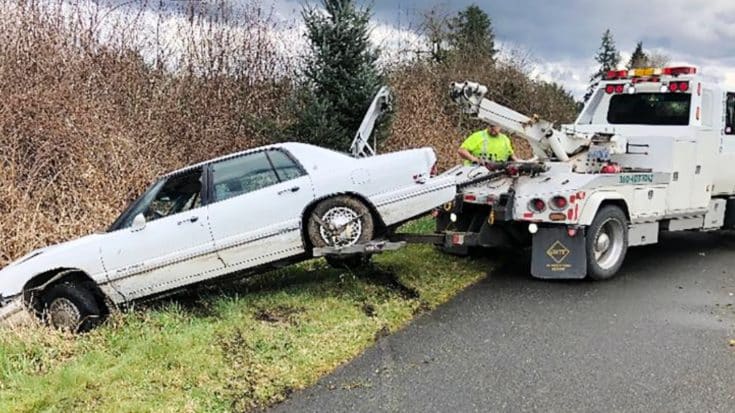 Imagine driving down the highway and seeing a car whiz past you, only to notice that a dog was behind the wheel. This is exactly what happened to a group of police officers in Washington State who were pursuing a suspect in a high-speed chase in late March 2020.

A man from Washington was arrested after leading troopers on a high-speed chase in which he struck two cars.

When they finally caught up with him, they found the man's dog in the driver's seat.

He said he was "trying to teach his dog how to drive."https://t.co/Qn5F60NOcJ pic.twitter.com/S8kuWAURbM

Hitting speeds of nearly 110 miles per hour, the 1996 Buick eventually came to a stop after it ended up crashing after veering off the road.

Police officers noticed that a dog was sitting in the driver’s seat, while a man in the passenger’s seat appeared to be controlling the steering wheel.

Police officers were shocked to see the pit bull (who they said was very sweet and docile) behind the wheel of a car, but they were even more shocked by what the unidentified suspect said after he was apprehended.

Heather Axtman, Washington State Patrol officer told CNN that the driver told police that he was “trying to teach his dog how to drive.”

“I wish I could make this up. I’ve been a trooper for almost 12 years and wow, I’ve never heard this excuse. I’ve been in a lot of high-speed chases, I’ve stopped a lot of cars, and never have I gotten an excuse that they were teaching their dog how to drive.”

The 51-year-old Lakewood, Washington man was arrested on suspicion of DUI, reckless driving, felony eluding police, and hit-and-run. As KOMO News reports, “it was not clear if the pit bull would be charged in connection with the incident.”

Check out the report and commentary from 98 Rock Baltimore below.