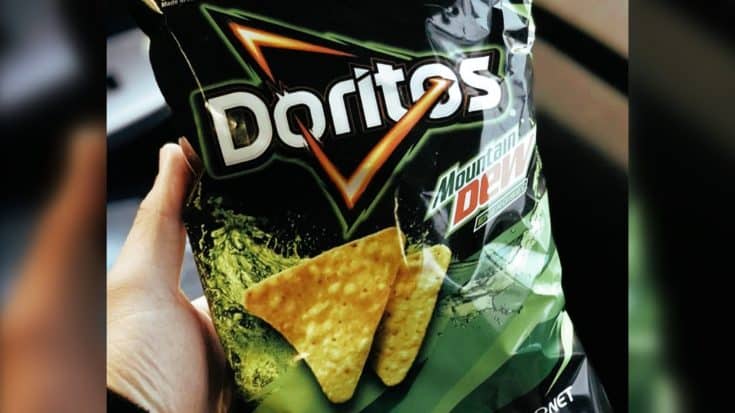 Two of your favorite snacks have come together to form a winning combination.

According to a few snack experts on social media in the land “down under,” Mountain Dew flavored Doritos have arrived and are taking the world by storm.

Go home, Australia, because you’re officially the drunkest country on the planet right now. ? New Mountain Dew Doritos, which I swear to God is absolutely 100% real, just dropped in the Land Down Under. The back of the package promises the Lemon Citrus flavor of @mountaindew with the signature full-on crunch of Doritos. This shouldn’t exist but it does. Big shoutout to my man @nickvavitiss for sending over a pic, hopefully him and I can do a swap so I can review this clown show of a product. Curious and deranged minds can likely find these on the Internet in the near future.

Especially popular with the gaming and e-sports community, many people have loved the combo of sweet, tangy Mountain Dew and cheesy (or ranch) Doritos for years. Few have thought to combine the two to create the perfect snack.

The new chip flavor doesn’t sound half bad – the crunchy, salty deliciousness of a Dorito combined with the crisp, lemon-lime flavor of Mountain Dew.

Many supermarkets in the United States carry tortilla chips with a hint of lime, and these Doritos likely have a similar flavor – perhaps with a bit more of a punch.

Aussies are loving every bite of Mountain Dew Doritos, and it’s likely that U.S. citizens will feel the same way when (and if) these little bites of heaven arrive stateside.

New Doritos “Mountain Dew Energised “ flavour. It is limited Edition and it is available on our website. For your safety “ we will bring them to you “ at the Greatest Redfern Convenience Store on Earth “ we are here for you “ . @doritos @doritos_aus @smiths_chips_aus #redfern #redfernconveniencestore #redfernnow #redfernhood #redfernlyf #redfernsydney #dreamcometrue #dream #food #foodlover #foodie #foodies #bestfood #friend #like4like #hazemisalegend #walloffame #follwer #follwers #customers #customer #corona #coronamemes #coronavirusitalianews

Curious about the opposite combination – Doritos-flavored Mountain Dew? Believe it or not, Pepsi (which owns Mountain Dew) actually released two lines of exactly that – one in 2008 and one in 2014.

The flavor experiment was short-lived, and the item was mostly released on college campuses.

Mountain Dew Doritos are only available for a limited time, and there’s no word yet on when they’ll make it to the U.S., but we can all hope they do!

Check out a local Aussie “snackspert” doing her own review of this new Dorito flavor below…and tell us if you’d be down to try them!