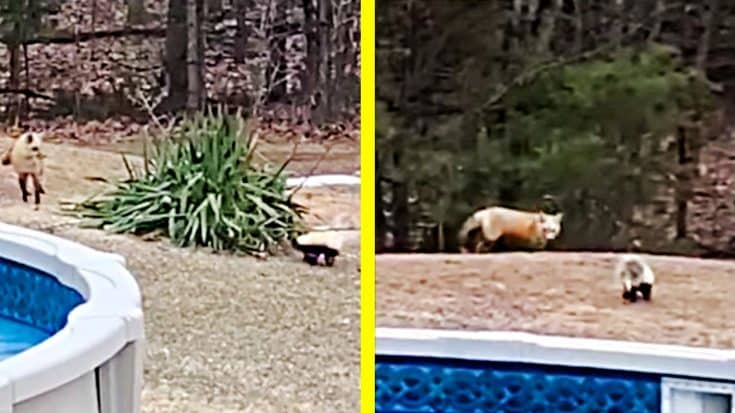 Cheryl Ward, a Maine resident, looked out into her backyard and saw the unlikely pair having a great time bouncing around and chasing each other in circles, just like a couple of puppies. The pair played together for over an hour, covering the entire area of the backyard.

“This video is really interesting and important, and what we’re seeing isn’t all that surprising. I’ve often noted that there is a ‘universal language of play’ that is shared across many different species, by which individuals communicate their intentions to engage in play, rather than to fight or prey on one another.”

Bekoff went on to say that the signals animals use to let each other know that they want to play are subtle and fine-tuned.

One thing’s for sure – there’s nothing more heartwarming for a human than to watch animals set aside their differences and become best buds.

We watched these two for over an hour they played all over our back yard. The fox has been around for over a month but brought the skunk today, they went off to play after the video.This video is exclusively managed by Kennedy News and media. To license or use in a commercial player please contact ‪news@kennedynews.co.uk.‬