WATCH: Jason Aldean, Carrie Underwood Debut Video For “If I Didn’t Love You” 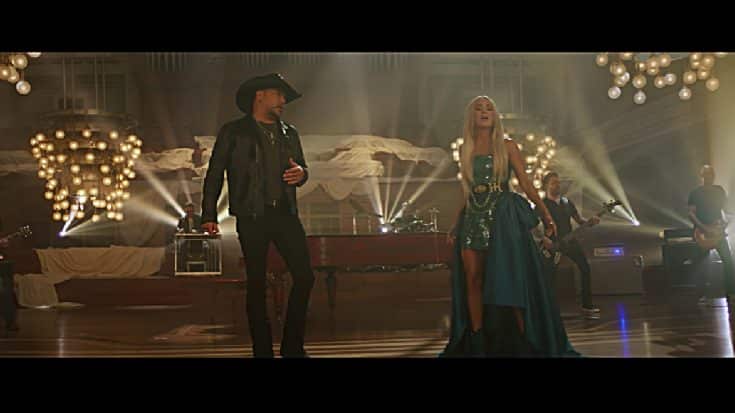 The highly anticipated music video for “If I Didn’t Love You” is here! The duet that features Jason Aldean and Carrie Underwood was released in early August, and fans have been anxiously awaiting the accompanying video.

The stunning video was filmed at Nashville’s Schermerhorn Symphony Center and captures the emotions of the song surrounding an unresolved breakup.

“Carrie was made for this song, but also for this video,” says Aldean via a press release. “I’m glad that she was down to get together to make it…it’s something that turned out a little outside of what I’d normally do, which is always cool.”

“If I Didn’t Love You” is the first single from Aldean’s tenth studio album that is scheduled to be released later this year, and the song is already setting records. Upon its release, the tune marked the highest debut of a solo male/female duet since the beginning of the Billboard Hot Country charts at two. Newlyweds Blake Shelton and Gwen Stefani’s “Nobody But You” previously held bragging rights to the milestone when their song debuted at nine in December 2019.

“I’m usually not a guy into doing real sappy-type love songs — not that this is sappy. It’s more of a kind of breaking up and getting over it kind of song. To me that’s a kind of love song,” Aldean told iHeart Country.

Jason added that the song was written as a duet, but he didn’t have a partner when he recorded it. Thankfully, Carrie’s schedule allowed for her to add her vocals to Aldean’s track and she made it into “a big, huge, power ballad sort of thing.”

Watch the music video for Jason Aldean and Carrie Underwood’s duet, “If I Didn’t Love You” below.