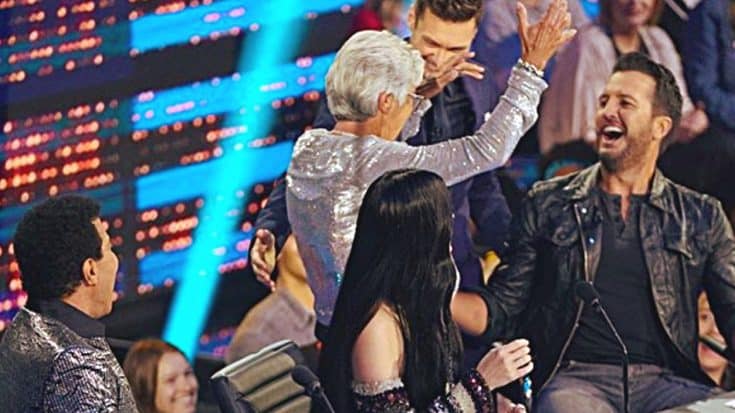 Sunday night’s (May 13) episode of American Idol was an emotional one, and for multiple reasons. The first of which being the fact that the top five contestants had to be narrowed down to the final three.

There was also an added layer of emotion to the night since it was Mother’s Day. In the spirit of the occasion, the show orchestrated a big surprise for one of its judges.

In honor of Mother’s Day, Luke Bryan‘s mother LeClaire Bryan sent in a taped message for him to say how much she missed him:

“I miss you here on Mother’s Day,” she said. “(I) wish I could be with you. I’m having a good day down here at the beach. Wish you were here with me. I’m very proud of you. I’m getting excited about the night. I get to watch American Idol one more time. Love you. Call you in the morning. I have something to tell you about fishing.”

Little did Luke know, but his mom actually taped that message way in advance and was there on set! Shortly after her video message played, Luke’s mom snuck out on stage to surprise her son.

Luke’s stunned reaction was caught on camera, and his look says it all. He was over-the-moon excited to see that his mom was there!

After the show aired, Luke shared a photo showcasing his reaction to his mom’s surprise appearance. Just look how happy he was!

That feeling when your mom surprises you on #AmericanIdol

His mom’s visit clearly took him by complete surprise, as Luke seemed shocked even long after she had made her appearance.“She got me,” he said. “This is like too many emotions in one day.”

But they were definitely good emotions! How awesome is it that Luke’s mom was able to travel all of that way just to spend some time with him on Mother’s Day?

You can watch the happy moment that Luke reunited with his mom on American Idol in the clip below. The surprise starts around the 2:15 mark. He was thrilled to see her!