By Jennifer Pernicano on June 17, 2021
Advertisement 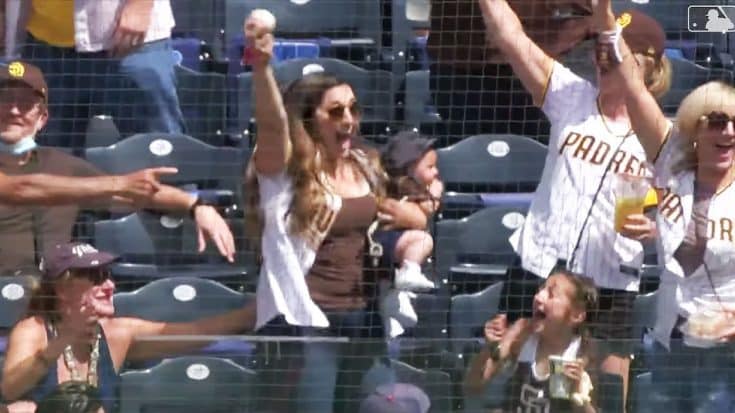 Usually, it’s the players who make amazing catches at a baseball game – this time it was one of the fans in attendance.

Footage captured the moment when one fan made an incredible one-handed catch out of a foul ball while holding her 3-month-old baby. The video was captured at an MLB game between San Diego Padres and Chicago Cubs on June 9, 2021, and quickly went viral on social media platforms. The woman was later identified as Lexy Whitmore and her infant son Maverick.

It was the top of the sixth inning of the Padres’ 3-1 loss to the Cubs when Chicago pinch-hitter, Jake Marisnick whacked Yu Darvish’s pitch directly into the seats along the first-base line.

The ball bounced off the upper deck, then once off the aisle, before Whitemore made the remarkable stretching one-handed grab with Maverick chilling contently in her other arm.

The Padres posted a video of the catch on Facebook, along with the caption, “Moms are amazing.”

Whitmore made the catch while her husband was away training in the Navy Reserve, according to Fox News.

“So when the guy hit the foul ball, it came down,” Whitmore told Fox News. “I saw it bounce, and it — honestly, it just kind of came right to me — I didn’t think it was like this amazing catch — and I didn’t think it would go viral. But it, you know, came to me and there was no doubt in my mind that I wasn’t gonna catch it.”

Watch the incredible catch below.