Watch Out For “Zombie Snakes” Playing Dead In North Carolina 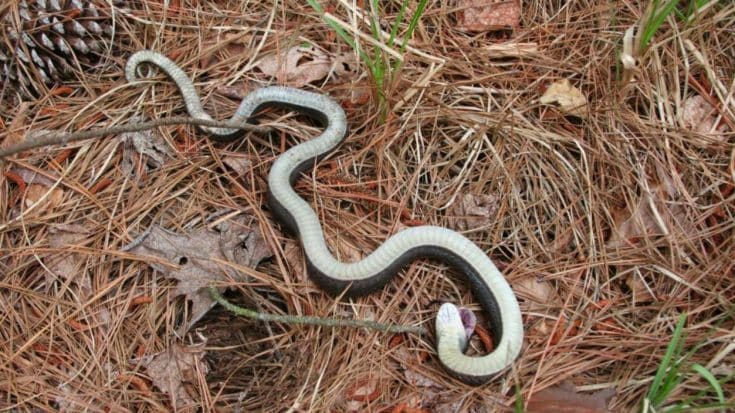 Authorities from the North Carolina State Park and Recreation say to watch out for snakes pretending to be dead while your walking outdoors.

They issued a warning saying that the eastern hognose snake, also referred to the “zombie snake” likes to play dead to defend itself and to not get too close to it because it could be tricking you. The snake has been known to “strike people repeatedly” who think it’s lifeless when really it’s alive.

They say when approached by predators it pretends it’s dead so they will become uninterested and move on, leaving it alone. Kind of how an opossum plays dead to trick its enemies. However, this snake is very alive and if you try to pick it up you might just find yourself being struck at.

“When threatened, hognose snakes hiss loudly and spread their necks like cobras do, resulting in the nicknames ‘puff adder’ or ‘spreading adder,'” Amphibian and Reptiles of North Carolina said in a statement. “They rarely bite during these displays, but they may strike repeatedly.”

Instead of watching clouds to see if we can keep weekend weather on track, let's play a game! Who is this “famous” NC…

The snakes are said to be spotted in sandy soil, floodplains, and hillsides but what’s most noticeable about them is their pointy nose which is used for digging. They grow from 28 inches to 46 inches long and come in a variety of different colors.

Fortunately, they’re nonvenomous and haven’t been documented to cause death to humans but their enlarged teeth at the rear of their upper jaw can hurt if bitten. Their teeth were specifically built to pop inflated toads like a ballon so they can swallow them.

So watch where you’re going on walks in the wilderness and you’ll be ok but just know if you see a snake laying on its back like it’s dead, it may be tricking you.