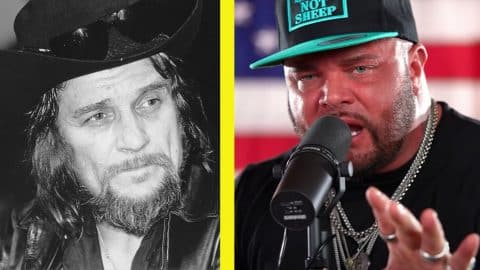 Waylon Jennings is known as one of the founding pioneers of the outlaw movement in country music. To this day, his legacy lives on through his children, and grandchildren who have continued to rise against the conformity of the typical country music that you hear on the radio nowadays.

Jennings’ grandson, Struggle Jennings has picked up the family torch and used it to shine a spotlight on today’s culture and music. Struggle’s song “God We Need You Now” from his latest album, Troubador Of Troubled Souls, is making waves in the music industry.

The song’s powerful lyrics challenge the listener to stop and think about what’s going on right now specifically in American culture. In typical outlaw fashion, Struggle lays out his heart through song lyrics. He points out several things happening in today’s society that most artists would steer clear of. The lyrics are heavy throughout the song and his message is loud and clear – America needs God.

To elevate the song to an even higher level, Struggle is joined by fellow artist, Caitlynne Curtis on “God We Need You Now.”

Recently, both Struggle and Caitlynne Curtis stopped by the Country Rebel headquarters to acoustically perform “God We Need You Now.”

Watch their incredible performance below.