By Miranda Raye on November 21, 2018
Advertisement 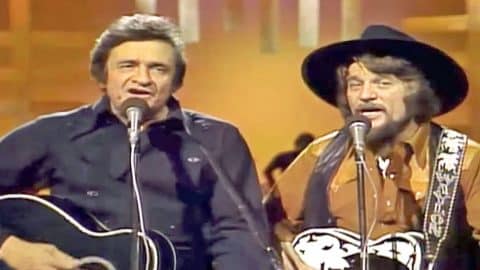 As far as country music friendships go, Waylon Jennings and Johnny Cash‘s was one of the most famous. The two were even roommates at one point!

Jennings and Cash collaborated on numerous occasions over the years, most notably in the country supergroup The Highwaymen. The group consisted of some of country’s biggest stars at the time, including Jennings, Cash, Wille Nelson, and Kris Kristofferson.

Outside of The Highwaymen, Jennings and Cash worked together on a song titled “There Ain’t No Good Chain Gang.”

The Two Friends Join For A Duet

The true definition of the “outlaw” image that Jennings and Cash represented, “There Ain’t No Good Chain Gang” was written by Hal Bynum and Dave Kirby.

The song is told from the point of view of an inmate who relays the important lessons he has learned in life. He names those lessons in the chorus, including the fact that you shouldn’t “go writing hot checks down in Mississippi.”

In conclusion, the inmate sings that the main thing he has learned is that “there ain’t no good chain gang.” Can a song really get any more “outlaw” than that?

Friends Conquer The Charts Together

Jennings and Cash’s combined star power helped drive “There Ain’t No Good Chain Gang” near the top of the country chart. It peaked at the second position on that particular chart, and also reached the fifth spot on the Canadian country chart.

As great as the recorded version of the song was, it’s even better to listen to Jennings and Cash perform it live.

The two did just that during an appearance on The First 25 Years TV special in 1980.

Jennings and Cash placed their rough and rowdy personas on full display that day as they chugged through their famous duet. They fed off of each other’s energy throughout the song, resulting in a entertaining performance that everyone surely enjoyed.

If you consider yourself a fan of country music, this is a clip that you’ll want to see. Go ahead and catch Jennings and Cash’s performance of “There Ain’t No Good Chain Gang” below.

It never gets old watching these two legends do what they did best!