By Miranda Raye on March 14, 2019
Advertisement 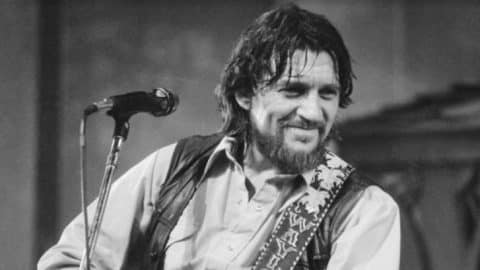 As crazy as Waylon Jennings‘ life was, it only makes sense that the circumstances surrounding his birth were equally wild.

The baby who grew up to become one of country music’s most iconic outlaw artists was born near Littlefield, Texas on June 15, 1937 to his parents Lorene and William Alvin Jennings.

It was a Jennings family tradition to have the firstborn son in the family take on the initials W.A. It’s a tradition that Waylon broke when his first child, son Terry Vance Jennings, was born on January 21, 1957.

In his book Waylon: Tales of My Outlaw Dad, Terry explained how the naming tradition started:

“[William’s dad], Grandpa Gus, gave his first son the initials W.A. to honor his father, and he’d stated his desire that each subsequent firstborn Jennings son be W.A.”

Terry later went on to explain how his father broke that tradition, and how disappointed his family was when they learned that he had:

“Oh boy, did my name sure set off a firestorm. ‘Where’s the W? Where’s the A?’ Grandpa Jennings demanded. ‘This can’t happen. His name has got to be changed. The oldest of the oldest? This won’t do. The firstborn has to be W.A., and it will continue to be that way in this family.”

But Waylon and his then-wife Maxine did not change Terry’s name. Later, when Waylon and his wife Jessi Colter had a son of their own, they finally gave him the W.A. initials, naming him Waylon Albright Jennings. Today, you know him as “Shooter.”

How Waylon’s Name Came Together The First Time

It’s clear that Shooter was named after his legendary father, whose name is certainly unique. How did his parents come up with such a name? Well, it was a combination of creativity and spontaneity that resulted in Waylon taking on his now-iconic moniker.

As Terry explains in his book, Lorene adored the name “Gayland,” but it didn’t fit the W.A. tradition. So she decided to just change the “G” to a “W,” and declared that her firstborn would be named Wayland.

She then chose the middle name Arnold for her little one, making his full name Wayland Arnold Jennings.

Comprised of 4 of the most iconic names in country music history, The Highwaymen were a force to be reckoned with. Kris Kristofferson, Johnny Cash, Willie Nelson, and Waylon Jennings made up the iconic supergroup who forever changed the spirit of country music. #countryrebel pic.twitter.com/h08oCuRnwl

Now we know what you’re thinking…if Waylon was actually named Wayland, then why isn’t that what we call him today?

Are you ready for an interesting story? Here goes…

Terry writes that after his father was born, one of the first people to pay a visit to his grandparents was a professor and preacher, who just so happened to be from the nearby Wayland Baptist College. He had been sent by the college to thank the Jennings family for naming their son after the school.

Lorene had known nothing about the college when she had settled on the name “Wayland” for her new baby boy.

The Jennings were devoted Church of Christ attendees and felt that “if you weren’t from a Church of Christ you were not able to fully understand, much less preach or teach, the Word of God,” as Terry put it.

Needless to say, she was a bit thrown off by the preacher’s thankful visit, and backtracked when he praised her for naming her son after the Baptist school.

Terry relayed what happened next:

“‘I’m sorry, but you must be mistaken,’ Grandma told the visitor. ‘I did not name my child after your school. I named my son Waylon—W-A-Y-L-O-N—Arnold Jennings. If the name showed up on the birth certificate to say any different, they clearly misunderstood what I said.”

However, Wayland was indeed the name that appeared on Waylon’s birth certificate, and it remained his legal name for the rest of his life. But it’s a name he never went by, thanks to his mother’s quick thinking and slight spelling change after the preacher paid his visit.

As for what Waylon himself thought about his unique name, he wasn’t a huge fan at first, but eventually came to terms with it. He wrote about his relationship with his name in his 1996 autobiography, Waylon: An Autobiography.

"Being funny is my second nature. Of course, being sexy is my first one." quote from 'Waylon: An autobiography' I love him.

“I didn’t like Waylon,” he said. “It sounded corny and hillbilly, but it’s been good to me, and I’m pretty well at peace with it right now.”

Now any time someone says the name “Waylon,” the rowdy outlaw singer is the first person that comes to mind. It’s funny to think that if the circumstances had been slightly different, the man that we know as one of country music’s greatest artists would have carried the name “Wayland” instead.

But he didn’t, and because of him, the name “Waylon” has gone down in history.