By Manly Bryant on August 8, 2022
Advertisement 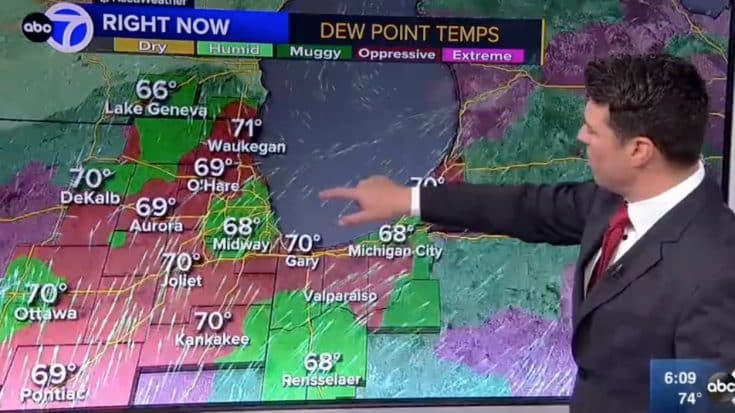 A hilarious moment went down on Thursday morning on live TV and has since gone viral after a Chicago weatherman discovered that his forecast screen was touch-screen.

The video showed the ABC 7 Chicago weatherman and meteorologist Greg Dutra doing his job like he normally does but when he touched the screen and ran his finger across it to point something out, the screen moved.

“I can do that? No way!” Greg said while turning to his colleagues awestruck.

“Are you serious? Did you just discover that?” morning co-host Val Warner, who was off-camera, asked him as his jaw drops.

At that point, another co-host, Terrell Brown, jumped on the video and showed Greg that, yes, you can move the weather screen simply by touching it as they both grinned ear to ear.

Excited, Greg continues to experiment with the screen’s functions and zooms in on it as well while belting out a laugh. Warner and Brown can both be heard cracking up about their co-worker.

“It’s a great day,” Greg shouts — clearly meaning both the Chicago weather and the fact that he learned something new.

He tried to go back to giving his weather report but couldn’t hold down his excitement and continued smiling.

“I didn’t know I’ve never touched it before!” he blurts, before moving the map again. “Oh my God, you can tilt it? What is going on here?”

Watch The Funny Moment Below

This wasn’t in the training manual! @TBrownABC7 @valwarnertv and I go OFF THE RAILS when I discovered the TV is a touch screen while on-air on @ABC7Chicago 😂 pic.twitter.com/almrdxqz3d