When Johnny Cash Got Fired, Merle Haggard Defended Him

By Miranda Raye on March 7, 2019
Advertisement 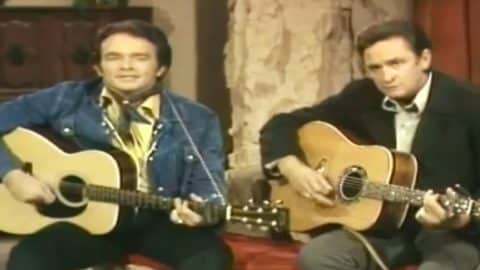 As Merle Haggard‘s career took off, many grouped him with other “outlaws” in the industry…singers who bucked tradition, did their own thing, and had a bit of a rowdy side.

But Haggard didn’t just take on the outlaw image, he lived the outlaw life. At least, he did in the past.

Haggard’s younger years were troublesome ones, as he found himself turning to a life of crime. Every time he got out of jail he went right back, until he was eventually sentenced to serve in San Quentin Prison in 1958.

The young Haggard’s stint in prison ended up changing his life. He worked on bettering himself while he was behind bars, and began playing in the prison’s country music band.

One Concert Changed His Life

It was during this formative time in the young Haggard’s life that he saw Johnny Cash perform for the first time. Cash was known for his prison concerts, and would serve as a much-welcomed source of entertainment to the inmates.

During a 2010 interview with The Boot, Haggard recalled how Cash behaved as he performed at San Quentin. He said he found it remarkable that Cash treated the convicts well and worked to entertain them, when he could have been rude like others surely would have.

“I was overwhelmed by his ability to just come out and grab a crowd, just on his own. When I saw him [one time] he had virtually nothing because he had lost his voice the night before, but he was able to come out a few hours later on stage. Here was a guy in front of these convicts who did not have to be nice. He was and he was able to come out and capture them, hold them in the palm of his hand, without even having a voice. I learned so much that day that was valuable.”

Haggard took what he learned and applied that to his own career once he got out of prison.

Before long, he was known as one of country music’s best singers and songwriters. But despite his proven success, he still had to deal with opposition and fight for what he believed in.

In 2009, Haggard was accepting an award from Country Radio Broadcasters during a ceremony that featured Emmylou Harris as a guest performer. She sang his Top 10 hit “Kern River” in his honor, and noted how she “almost drove off the road” the first time she heard it because she was blown away by how good it was.

The mention of the song made Haggard recall how the head of his former record label, Rick Blackburn, was not a fan of the track and made it clear on more than one occasion. After Blackburn brought up his distaste for the song for what Haggard believed to be a third time, he ripped into him.

RIP Merle Haggard. Nobody did a country song quite like you. You were a badass inspiration to us all. ❤️ pic.twitter.com/18nR79taLU

Speaking Up On Johnny’s Behalf

But Haggard wasn’t through with him quite yet. By that time, he and his former idol, Cash, were friends and collaborators. And Haggard was furious when Cash was dropped by CBS, the record label that Blackburn oversaw.

Through defending himself, Haggard took the opportunity to speak up on Cash’s behalf as well. He tore into Blackburn, and is quoted by CMT as he remembered what he said that day.

“I said, ‘Who do you think you are? You’re the son-of-a-b—- that sat at that desk over there and fired Johnny Cash. Let it go down in history that you’re the dumbest son-of-a-b—- I’ve ever met.'”

Haggard’s appreciation for Cash only grew over time. After the latter star passed away in 2003, Haggard continued to speak about how he believed “The Man in Black” was one of the best in the business.

During his 2009 interview with The Boot, Haggard was asked to define what he thinks makes a country artist an outlaw. His response was that a true outlaw is someone who does things their way, not someone else’s, just like Cash.

“Johnny Cash wasn’t made in a grooming school and the next Johnny Cash won’t be found that way,” he said.

There will never be another like Cash or Haggard, that’s for certain.