By Miranda Raye on December 9, 2021
Advertisement 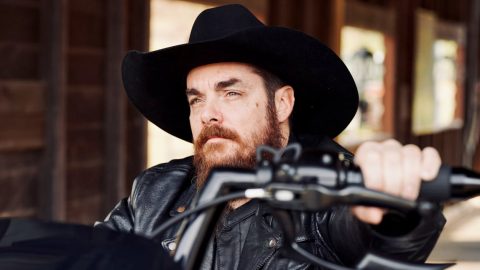 A passion for music is in Whey Jennings‘ DNA. He is the grandson of Outlaw Country legend Waylon Jennings, and has followed in his musical footsteps.

Whey was born in Texas as the oldest son of Terry and Katherine Jennings. He recalls developing a “deep love” for music at a young age.

During one of Waylon’s shows, Whey’s grandmother, Jessi Colter, had just finished singing her iconic song “Storms Never Last.” She set her microphone down backstage, and a young Whey picked it up and started singing one of his grandpa’s hits, “Mammas Don’t Let Your Babies Grow Up to Be Cowboys.” After Waylon saw what Whey was doing, he grabbed his Fender Telecaster guitar and jumped to join him on stage. Needless to say, the crowd went wild.

Whey believes that moment is what first fueled his passion for music.

Since then, Whey has hit the road on numerous occasions to play for fans all over America. He has performed with other artists such as Kid Rock, Trace Adkins, Miranda Lambert, and the late Charlie Daniels.

Whey has made it his mission to “preserve the spirit of traditional country music while staying true to his own individual creativity.”

“…[Whey’s] music transports listeners back to a time when being a cowboy meant you worked hard, and often played even harder. Paying homage to the core values and spirit of the original outlaw country, Whey Jennings is looking to pick up and carry the torch for the music his grandfather pioneered.“

Fans will get the chance to hear some of Whey’s music on his upcoming album, If It Wasn’t for the Sinning. The album will be released in early 2022.

“This album is a bit of a crossroads for me- it was written both pre and post sobriety,” Whey said while describing his new project. “It’s a mixture of everything I’ve ever been. My whole life.”

That’s not the only big announcement Whey has to share. Country Rebel is the first to break the news that Whey has “proudly signed” to Dirt Rock Empire, the record label founded by country music duo The Lacs.

Dirt Rock Empire was formed in 2017 “with the goal of providing an artist-friendly home to nurture creativity, and is an alternative to the number crunching labels that see each artist as little more than a paycheck.”

The label is eager to take Whey “to the next level” in the new year. Whey is equally excited to be working with the Dirt Rock Empire.

“They’re just real down to Earth people,” Whey said, “and I like everything they have going on over there. Plus if my buddy Creed is good with it- so am I.” Whey is referring to his friend Creed Fisher, who is one of the artists signed to Dirt Rock Empire.

Head below to watch a video introducing Whey as the newest member of the Dirt Rock Empire family.

Whey is thrilled about signing with Dirt Rock Empire, and hopes his fans will enjoy the new music he has to share in 2022. As he said, “I’d rather have a million smiles than a million dollars.”