By Manly Bryant on December 1, 2022
Advertisement 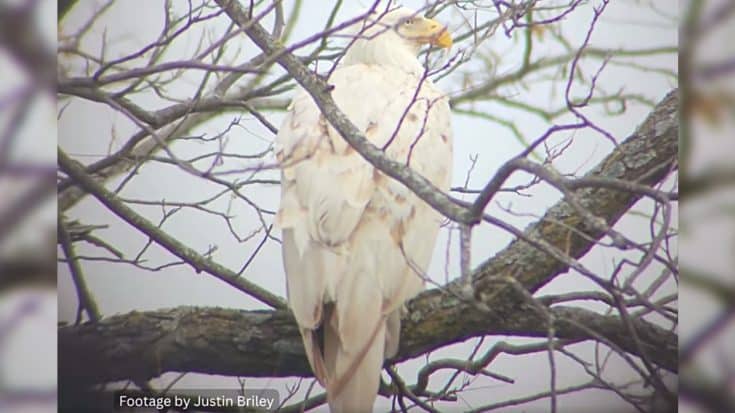 The Facebook page for the Oklahoma Department of Wildlife Conservation shared a video of an incredibly rare and majestic white bald eagle that was perched at the top of a tree in the state.

The department wrote, “Oklahoma seems to be a great place to spend the winter – especially if you’re an eagle.”

The footage of the white bald eagle was taken by ODWC biologist Justin Briley and shared with the state who then released the video to the public.

“While there isn’t any way to confirm that this is the same one seen repeatedly along the Illinois River last year, leucistic eagles are VERY rare, and a treat to see in outdoor Oklahoma!” ODWC wrote on Facebook.

The eagle was almost completely white with just a few brown spots and of course, its bright yellow beak. It perched powerfully in the tree and looked around keeping a bird’s eye view of everything.

This white bald eagle might not camouflage into its surroundings as well as normal colored eagles, however, when it’s cold, snowy, and cloudy, this bird camouflages better than the other ones do.

Wildlife officials said that another eagle that looks a lot like this one was spotted in the Sequoyah National Wildlife Refuge near Vian, Oklahoma and while there is no way to confirm that it’s the same eagle, they think it could be.

This other eagle was spotted back in February and captured on camera by wildlife photographer Greg Silva and the photos were later shared on the Sequoyah National Wildlife Refuge Facebook page.

“It flew right by me, banked and landed about 50 yards from me,” Silva told Oklahoman at the time.

After sharing the photos on social media, there was a dramatic increase in phone calls and new visitors coming to the refuge to see if they could catch a glimpse of the white bird.

At that ime, assistant manager at the Sequoyah National Wildlife Refuge Damon Taylor said, “It’s been pretty hectic. I assume it would be in the area, but with these recent real strong south winds and weather that has moved through, it is really hard to tell where it would be.”

The Oklahoman says that the Sequoyah National Wildlife Refuge is home to perhaps the largest population of bald eagles in the state.