White Deer With Antlers Seen In Pittsburgh Area In 2019

By Miranda Raye on November 4, 2019
Advertisement 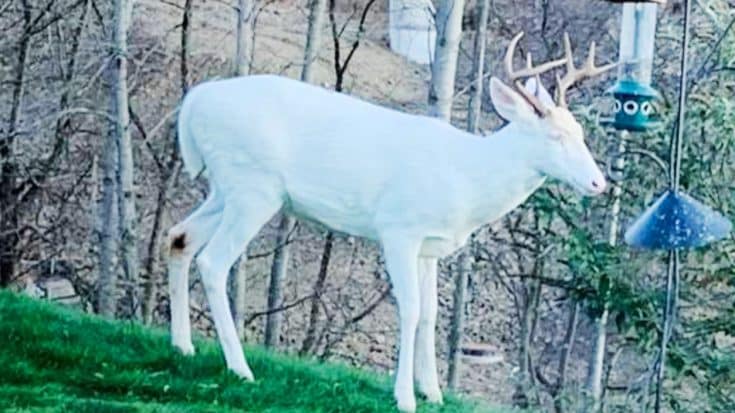 While the odds of seeing an albino deer aren’t that high, the Pittsburgh area was home to at least three in 2019.

In September 2019, KOKA CBS 2 News published a report about an albino fawn seen in the Pittsburgh area. Resident Bryan Polk told the outlet he first noticed the fawn in June 2019, and it kept returning.

The publication called the September spotting of the fawn a “magical sight.”

This wasn’t the first time that an albino deer was seen in the area. The article about the albino fawn states that another albino deer was discovered the week prior, and it was “much larger.”

Yet another albino deer stepped out in the area, and this one was seen sporting a decent-sized set of antlers.

The sighting was reported by Dennis Beech, who discovered the deer in the yard of his Allegheny County home. Beech managed to snap a few photos of the animal, which was next to his bird feeder.

According to KOKA, which also reported on this deer sighting,”Experts say the odds of an albino deer being born are about one in 20,000, while others say the odds are closer to 30,000.”

Wildlife biologist Fayln Owens is one of the “others” that says the odds of seeing an albino deer are closer to 1 in 30,000. When another antlered albino deer was seen in a North Carolina suburb in July 2019, news station WRAL spoke with Owens, which is when she described the odds of such a sighting.

No matter what the exact odds are, it’s clear that an albino deer sighting is a rare one. But since three albino deer were seen in the Pittsburgh area in just a few months, it doesn’t seem like such a rare occurrence there!

Beech also filmed a short video of the albino deer that entered his yard, and you can catch that clip below. It’s a gorgeous animal!