By Manly Bryant on April 5, 2021
Advertisement 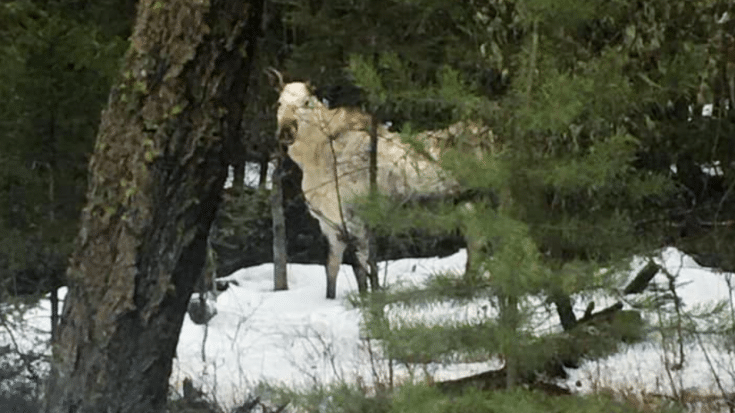 Hattie Deyo from Williams Lake, Canada was driving down the road when she spotted an all-white moose. The eye-catching creature was such a rare thing to see that she stopped her vehicle to take a video.

The Canadian resident said that it happened on a back road in the Cariboo which is outside the city of Williams Lake.

“It was with its mom, which was a brown moose. I didn’t know what it was at first. I thought it was a cow with long legs,” she told The Williams Lake Tribune.

Hattie went on to say that after she pulled over and parked, the mother moose walked off into the woods while the white baby moose stuck around for a bit and watched Hattie.

“It didn’t go anywhere,” she said. “It was really cool and stood there for about 10 minutes … then it just casually strolled away.”

Sgt. Jeff Tyree from the Cariboo Chilcotin Zone Conservation Officer Service said that he has never seen a white moose in the wild throughout his entire 14-year career.

“It’s definitely unique,”  The Williams Lake Tribune reported Sgt. Tyree saying. “You’ll only ever see one like that in your lifetime.”

Hattie may have been the only one to see it in person, but you can click below to watch the video she took. It’s quite fascinating.

Watch Footage Of The White Moose Below