Who Won Entertainer Of The Year At The 2022 ACM Awards?

By Miranda Raye on March 7, 2022
Advertisement 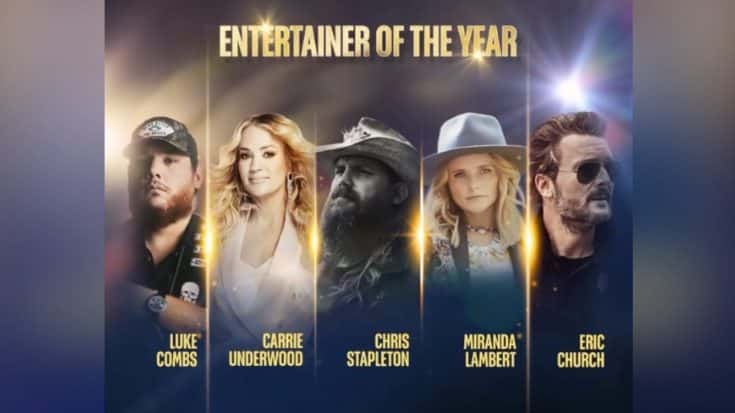 After taking place in Nashville for two years, the ACM Awards returned to Las Vegas for the 2022 ceremony on March 7. The event was held at Vegas’ Allegiant Stadium.

Dolly Parton, Jimmie Allen, and Gabby Barrett co-hosted the ceremony. It was made available to stream on Amazon Prime Video.

As always, the winner of the Entertainer of the Year Award was announced at the end. They saved the biggest award for last!

Five artists were nominated for Entertainer of the Year this year. They were:

Luke Bryan won the ACM’s Entertainer of the Year Award last year. In 2020, Carrie Underwood and Thomas Rhett made history as the first artists to tie in the category, and the award was given to both of them.

So who won at this year’s ceremony? We have the answer.

At long last, host Dolly Parton announced that Miranda Lambert was the Entertainer of the Year!

It’s no wonder why Lambert was named the Entertainer of the Year. 2021 was a big year for her, largely due to the release of her new album, The Marfa Tapes.

The Marfa Tapes album was released in May, and was a collaborative effort between Lambert, Jon Randall, and Jack Ingram. Then in October, she and her Pistol Annies bandmates released their first-ever Christmas record, Hell of a Holiday.

Also in October, Lambert released her latest single, “If I Was a Cowboy.” The song originates from a yet-to-be announced album.

Lambert unfortunately couldn’t be at the ACM Awards to accept her trophy in person. She was in London, but she was watching the awards from there, so she accepted her award via video call.

After such a successful year, Lambert is more than deserving of this award! Congratulations to her!

A post shared by Academy of Country Music (ACM) (@acmawards)