By Miranda Raye on March 9, 2022
Advertisement 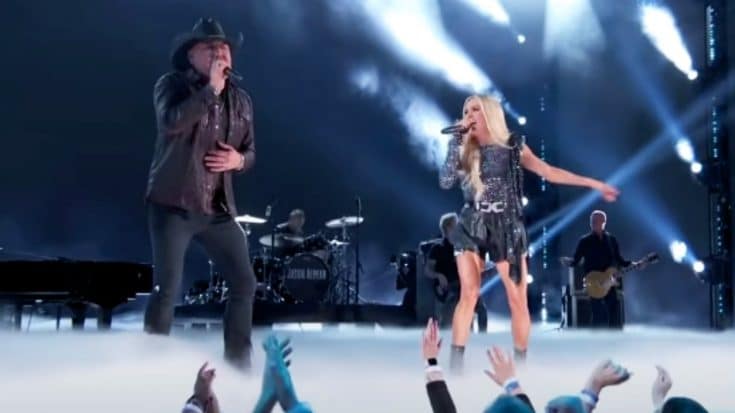 Fans had no idea Jason Aldean and Carrie Underwood were performing their #1 duet “If I Didn’t Love You” at the 2022 ACM Awards in Las Vegas. They had been announced as separate performers, so fans weren’t expecting a collaboration!

Aldean finally spilled the beans on their plans when he walked the red carpet at Allegiant Stadium. But anyone who missed that interview still had no idea Underwood would be joining him later.

Before their performance, Aldean and Underwood celebrated when “If I Didn’t Love You” won the Single of the Year award.

A post shared by Academy of Country Music (ACM) (@acmawards)

With the excitement of their award win fueling them, Aldean and Underwood later took to the stage to sing. Aldean started off on his own, and it appeared he was going to sing “If I Didn’t Love You” solo.

But then Underwood emerged to sing her part, and she made quite the entrance!

Underwood descended from the ceiling while seated on a chair within a ring. She did this all while singing her verse.

Afterward, Aldean said he was “scared” for Underwood knowing how she was going to make her way onstage during their performance.

“I was scared for her, actually. When we came to rehearsals, I knew she was coming from the ceiling, but I was like, ‘Where’s she sitting?’ And they showed me this little bitty seat. I went to her and said, ‘Man, I’m glad you’re doing this and not me, because I would have tapped out.'”

Underwood and Aldean wanted to do something to make this performance stand out. We’d say they accomplished their goal!

Aldean called his duet partner “a trooper” for being willing to make such a daring entrance.

You can watch the pair’s duet in the video below. Underwood’s entrance was pretty epic!