Why Lucille Ball Wore Black Wool On Her Wedding Day 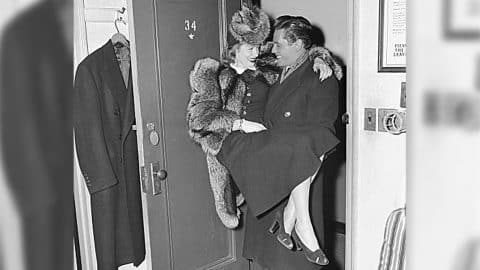 Lucille Ball’s fame took off quickly — and around the same time, so did her romance with Desi Arnez. The two weren’t sure of where their courtship was headed, but Arnez knew that he wanted a future with the future I Love Lucy star.

Ball was called away from New York City for work in Milwaukee, and her travel took longer than expected. She originally told Arnez she’d only be gone a day, and when she got back, they could sit down and have a talk about the next step in their relationship.

A post shared by I Love Lucy💋 The Golden Girls👜 (@ilovelucy.thegoldengirls)

One day stretched into five, and Arnez was furious — to the point where he even accused Ball of infidelity. After their argument, Ball decided it was time to head back to the Big Apple to settle things with her then-boyfriend. She wanted to get there fast, and left most of her belongings behind, asking an assistant to bring them back to NYC later.

Little did Ball know, Arnez was planning an elopement that kept getting foiled because of her schedule changes. When she returned home and agreed to get married, she realized she had nothing to wear but the black wool outfit she already had on. Ball said Arnez was so elated with their nuptials that he didn’t even notice her unusual choice of bridal wear.

Watch a collection of home videos of Lucille Ball and Desi Arnez below.