Why Steven Tyler Slapped Donald Trump With A Lawsuit 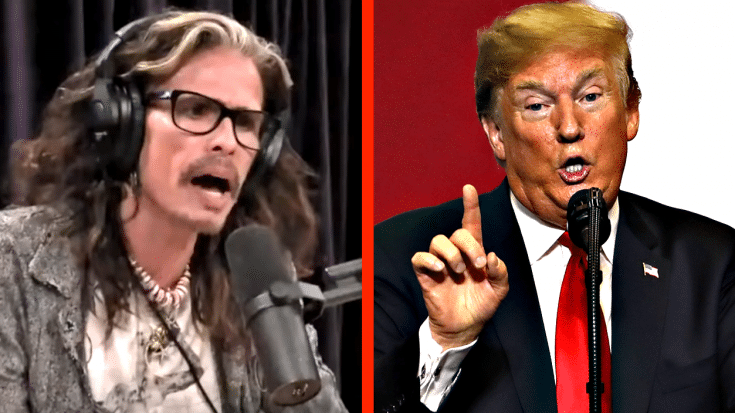 “Oh yeah I know him – I knew him,” the legendary rocker explained. “I’d been down to Mar-a-Lago and offered money to do shows and stuff for him.”

In an interview with Joe Rogan for his podcast, The Joe Rogan Experience, Steven Tyler opened up in great detail about his lawsuit against Donald Trump and exactly what happened that led him to sue the newest President.

Back in 2016, when Donald Trump was blazing down the campaign trail, he was holding rallies in almost every swing state and major cities across the U.S. When he would appear at these gatherings, often he used songs before asking the artists for permission beforehand. As a result, multiple artists reacted in negative ways.

That’s not quite what happened with Steven Tyler, though.

“Does it feel weird that he’s the president?” Rogan asked Tyler close to two years after the election. “Very!” Tyler answered before explaining how a simple phone conversation with Donald Trump turned into a full-on lawsuit.

“Amy, over there, worked for his wife for seven years,” Tyler explained pointing to his assistant. “And I was in Maui and I get a phone call and she says ‘Jesus, it’s Donald.'”

“He calls me up and I said ‘Donald, you can’t use ‘Dream On’ – that’s for causes…not campaigns’,” he continued, revealing that even after he told Trump not to use the song he did anyway. “And I had to sue him!”

Not too long after Tyler filed suit against Trump for the unauthorized use of Aerosmith’s hit song “Dream On,” Trump responded with a letter that Tyler says he’s going to have framed.

“He played it anyway…then he sent a letter that said ‘Then I’m playing Kid Rock or something’,” Tyler said looking to his assistant for clarification. “Oh – he said ‘I found a better song.'”

There were many news outlets that reported on Trump’s misuse of various songs, but this is one of the first times Steven Tyler has spoken so openly about it.

What do you think of this lawsuit? Let us know in the comments.

(Warning: Some may find the language used to be unsuitable. Viewer discretion is advised.)