Wife Breaks Down When Dale Jr. Surprises Her Husband

By Manly Bryant on October 16, 2018
Advertisement 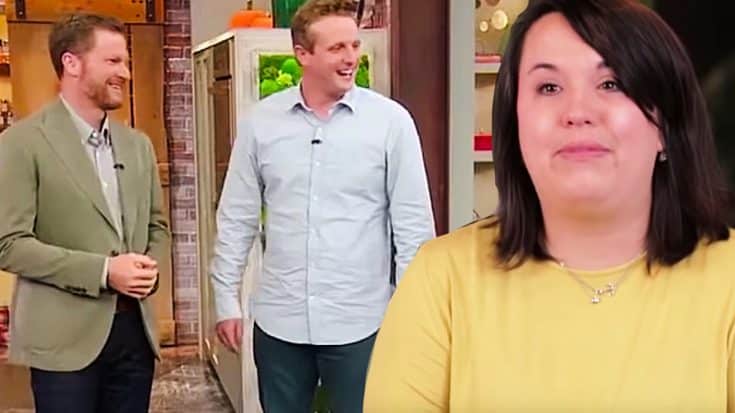 One young couple was given the shock of a lifetime when NASCAR’s most-popular driver surprised them with a once-in-a-lifetime gift – and it was enough to bring the wife to tears!

Appearing on Rachael Ray’s daytime talk show, a young pastor (who’s also a short track driver) and his wife were given the royal treatment after his wife had submitted for his special wish to come true as part of the show’s 13th season celebration.

Justin and Bridget Caton have had a wonderful marriage and even welcomed a beautiful baby boy into their lives over the last seven years. Justin, who works as a pastor, also races in short track events during his free time.

Inspired by his father’s love of NASCAR, Justin, too, has fallen in love with the sport and together they field the No. 7 car bearing the family business as their major sponsor.

? Happy Wedding Anniversary to this girl and best friend. 7 years flys when your having fun! pic.twitter.com/pojtOsnDEx

On top of racing competitively himself, Caton also is probably one of the biggest Dale Earnhardt Jr. fans the world has ever seen!

Taking cameras on a back-stage look at their home and her husband’s massive memorabilia collection, wife Bridget explains that he’s been a Dale Jr. fan since day one – and he’s even getting their toddler son into racing.

Once they got on the show, much of the surprise reveal had already happened – but after bringing out Dale Jr. to meet one of his biggest fans, he had another surprise for the Catons…and it was one that would leave Bridget in tears!

From the moment Dale Jr. walked out on stage, Justin was flabbergasted and Bridget was emotional watching her husband’s dream come true before her eyes. It was a pretty awesome scene to watch and Bridget described the emotions behind it perfectly.

“He just does so much for us,” she explained in the pre-show interview as tears rolled down her cheeks. “And I just wanted to do something for him because he always puts us first. This is just kind of unbelievable that I’m getting to do something like this for him.”

As dedicated as Justin Caton is to racing, he is even more dedicated to advancing the cause of Jesus Christ by making disciples! #ThatsOurYouthGuy

After having a few words with Dale Jr. and Bridget getting some tissues to dry her amazing tears of joy, Dale Jr. had something else for this beautiful couple – a surprise trip to one of Justin’s favorite raceways that he’s never been able to watch a race at!

A true bucket list moment for Justin, Dale Jr. said that he’d already gotten tickets for the family and they’d be joining the Earnhardts as their guests for a fantastic example of true American autosport magic at Darlington Raceway – for the very first time!

Watch this beautiful moment in a NASCAR fan’s life below and let us know what you think in the comments!