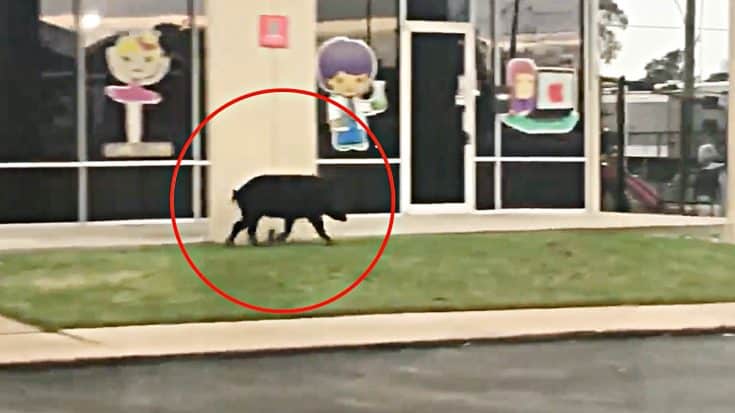 Feral hogs seem to be everywhere right now. The invasive species is quickly populating residential areas, especially in Texas – and you’ll see one instance as you read on.

Feral hogs are a big problem in Texas. These invasive "pigs gone wild" destroy habitat and compete with native wildlife. Here are some tips for dealing with them:

Posted by Texas Parks and Wildlife on Thursday, January 23, 2020

The feral hog made its way across the road as area resident Lee Melvin recorded the animal on his cell phone. The hog can be seen prancing around as if he’s on a mission, much like a dog on its way to retrieve a treat.

The hog made its way to the shopping plaza, where some people were coming out of stores to make their way to their cars. No one was hurt, but many people were scared and retreated back inside the stores.

Feral hogs are increasingly becoming a problem in Texas, as development forces them out of their natural habitat. “It came right out of the wooded area. Anywhere there’s woods, they’re gonna filter into it,” Melvin said.

They dig. They destroy. And there’s no stopping feral hogs.

The government is taking serious measures to control the hog population in the area, and are even allowing hunters to shoot at feral hogs from hot air balloons. Residents are warned to be cautious of hogs, as they can hurt or even kill humans, especially when the hogs are in groups.