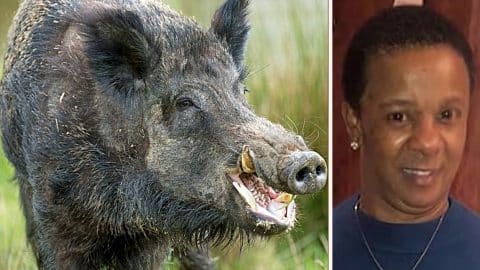 According to The Blaze, a woman was found dead laying outside an elderly couple’s home on Sunday morning (November 24th) in Anahuac, Texas. The woman, Christine Rollins, was on her way to work as a caretaker at the couple’s home when she got ambushed by a pack of wild hogs.

Authorities say feral hogs attacked and killed a woman outside a Southeast Texas home where she worked as a caretaker.https://bit.ly/2QMBFjk

When, Where & How This Happened

This happened around 6am when it was still dark. The police report says she stepped out of her car, locked the door and started to walk towards the house when the hogs snuck up on Christine and knocked the 59-year-old woman down to the ground, then proceeded to bite her until she bled to death.

Local sheriff Brian Hawthorne said in a YouTube interview by KHOU 11, “In my 35 years, I will tell you, it’s one of the worst things I’ve ever seen.”

The next morning the elderly couple called the police after looking outside their window and finding Christine lying motionless. When the officers arrived they feared it was wild hogs that did it but they never gave an official public statement on it until an autopsy was done. The autopsy confirmed that the hogs indeed did it.

“My detectives and the criminal investigation team felt like [feral hogs] was what it was but we couldn’t come close to announcing until we had the cause of death from the medical examiner’s office,” Brian said.

A Texas woman was found dead after pre-dawn attack by a group of feral hogs outside a home, the Chambers County sheriff said.​ https://t.co/AznifjIEGL

According to the Texas Parks and Wildlife Department, wild hogs can grow up to 400 pounds and are considered an invasive species in Texas. They have been a nuisance animal for many years, destroying crop fields, people’s lawns and even defecating in the water supply.

The law states that the people living in the state of Texas have the right to kill hogs with any means necessary in attempts to control the overgrown and widespread population. Meaning they can be shot, trapped, snared, and even hunted by trained dogs to get rid of them.

This is officially the 4th incident where a wild hog fatally killed a human in the United States and sheriff Brian Hawthorne shared his sympathy for the Rollins family and the elderly couple.